Zooropa – U2: An Alternate Tracklist 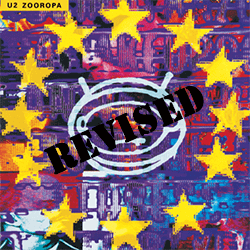 In my quest to revamp and improve U2’s albums, I’m scraping the bottom of the barrel with Zooropa and Pop.

This was unlike my recreation of such seminal U2 albums as The Joshua Tree and The Unforgettable Fire. I thought combining my least favorite U2 albums into one would help me enjoy it — kind of like a U.S. Olympic Basketball Team of U2 albums — but I have to admit that finding even 10 likeable songs from Zooropa and Pop was difficult. In fact, there’s only one song that I really like on either of these two albums (“Zooropa”). The rest is just filler, and I’ve had to resort to grabbing a cut from the Batman Forever soundtrack to get the list to 10 songs.

What’s wrong with these two albums? U2 essentially took the ball that they created with Achtung, Baby and ran with it all the way to the mixing board. It’s full of weird sounds, techno beats and lyrics that don’t seem to be thought out at all (“Some days are dry, some days are leaky / Some days come clean, other days are sneaky…” WTF?).

I won’t even try to assign meaning or interpretation to the choices I made for this revised album. I just know that listening to them didn’t make me hurl. No “Daddy’s Gonna Pay for Your Crashed Car.” No “Some Days Are Better Than Others,” both titles that sound straight out of a car insurance commercial. The songs on this compilation are, in essence, the least objectionable songs on the two albums.

Listen if you want. I’m gonna go listen to a Nickelback album and jab my eardrums with icepicks.