The Rise and Fall (and Rise) of the Cassette

When people think back on the 80s, they’ll think of neon, a Rubik’s cube, leg warmers, big hair, and maybe an artist or two such as Michael Jackson or some nondescript synth-playing new wave band. But for me, the 80s will always be the decade of the cassette.

Cassettes, according to Wikipedia, were first created decades earlier in 1963 in Belgium and had several names – the compact cassette and the musicassette. Some were blank, which allowed you to have hours of fun recording your voice on it, and others had prerecorded music on them. 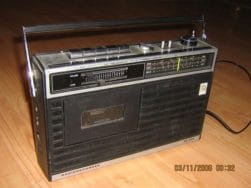 My sister had one of the first “jam boxes,” which was really just a portable radio that happened to have a cassette player in it.

After a while, the heads got out of alignment, and you could flip the tape over and hear yourself talking backward. There’s no telling how many demons we summoned with our backward talking. It was like you were in your own Led Zeppelin song.

We had fun with the cassette recorder, but our main way to play music was through the giant coffin-sized stereo in the living room, which housed and played LPs and 45 rpm singles. I bought my first album in 1977 – Foreigner’s debut eponymous LP – in 1977 at the age of 9, and my first single, the soothing ballad “Beth” by the raging rock group KISS, shortly thereafter.

If you wanted music on your cassette, you had to hold up a cassette player to one of the two-foot-tall tweeters (I preferred treble to bass) while a song played on the radio, and hope that your parents didn’t call you for dinner or walk through the front door, ruining your recording session.

The Growth of the Cassette

It wasn’t until the Walkman debuted in 1979 that the realization struck people of what the cassette could actually do. Here you had the portability of a transistor radio, along with the full-length hi-fidelity recording of a record album. It was the best of both worlds.

I got my first “tape,” as we called them, in Christmas 1983 when I unwrapped U2’s The Unforgettable Fire as a present. I played it on my other gift, a silver stereo jam box that I treasured for years – until it started playing tapes backward as well.

Cassettes were even more finicky than record albums. With an album, you just ran your nail down the open slot of the album, and the cellophane would give way. Cassettes (and later CDs) took you several minutes to break into, and it usually involved a knife to open one of the sealed ends of the wrapping.

But when you opened it and breathed in the smell of new music – I can’t really describe the smell. It was almost grape-like, it smelled so sweet and good. You’d unfold the insert and start reading the liner notes in microscopic copy, along with the lyric sheet as the cassette played. 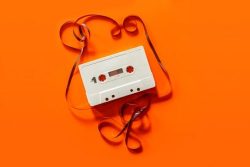 Photo by Daniel Schludi on Unsplash

There were other problems with cassettes. Albums just skipped, developed pops and scratches, and were full of dust and fingerprints. Cassette players would eat your damn cassette. Just chomp down on the metal tape winding it through its series of rollers and play heads, and you’d spend hours trying to untangle it.

You’d then have a mess of ribbon everywhere, and it took a regular pencil stuck through one of the spools in the cassette to wind the ribbon back into the cassette itself. If being stuck in the cassette player left a crease in the ribbon, you were done. That song would forever have a muffled sound in it at the point of the crease.

Sometimes, the tape actually broke. My Don Henley cassette broke, and like a true audio engineer, I spliced the two ends together using Scotch tape. I lost about a second of the song as the tape wound through the heads and played nothing, but it survived another few years. 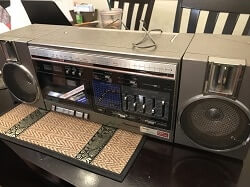 It was around 1985 that I got my true masterpiece – a Panasonic jam box with detachable speakers, Dolby reduction, and graphic equalizers. I bought additional speaker wire and set up the speakers around my room, creating the first surround sound system without Dolby. It was marvelous. Of course, I had to take it down when I had to help DJ some of the dances at the high school, but it was worth it.

I lived in the mountains and got almost no reception in the valley in which I lived, so I bought an FM amplifier, which greatly helped with the static. My setup was complete, and my first music pirating adventure was on. I’d call up the Atlanta radio station, request “Who’s That Girl?” by Eurythmics, and stayed in my room by the record button until it played. Sometimes I’d get the whole song, and sometimes the DJ would blabber on incessantly about nothing right up until the singer started singing. These were the first playlists ever created, manually curated with patience from hours of waiting for the right songs to come along.

I dug up a few of my old mixtapes the other day. The sound was muffled after surviving temperature extremes in the attic and garage, but the songs are still imprinted on there. I can still remember what the DJ said after each song – sometimes it was Casey Kasem.

Then the double cassette player came out, and we were able to really copy music. We were also able to create mixtapes for our loved ones, putting U2’s “Bad” in one player and recording the song onto another cassette. We’d continue on with our mix until it reached the end, and then we’d flip the cassette over and start side 2. (See “High Fidelity” for the art of making a mixtape.)

Soon cassette singles came out, called “cassingles.” I bought Janet Jackson’s “The Pleasure Principle,” Guns & Roses’ “Sweet Child O’ Mine” and the Traveling Wilburys’ “Handle with Care.” The phenomenon seemed to come and go in a summer.

Sometime in 1986, I heard my first compact disc from my band teacher, who promised that it was the next thing in music. She marveled at the sound quality; I couldn’t tell a difference. But slowly my tape collection gave way to a CD collection as the record companies got my money twice for albums I really loved. My jam box gave way to a full-fledged stereo system with a revolving CD tray so I could play up to five hours of music at once.

Imagine! Five hours of music without changing CDs! (I write this while my playlist of songs I need to rate on my computer measures 4.8 hours. My full collection would last me almost a month.)

I’ve gotten rid of most of my pre-recorded cassettes and digitized my CD collection, which is a shame, for I’ve been told that cassettes are coming back into fashion along with LPs – two retro trends I’ll never understand. My collection would be worth hundreds of dollars now, but the survivors are sitting in my garage like unplayed toys, waiting for someone to notice them.

I’ll forget about a song sometime and venture out to find a CD that I forgot to digitize. I’ll pass by the cassette drawers, open them, and go down memory lane with a look at all my mixtapes and bootlegs that I collected as a teenager. It’s the sound, look and smell of a generation.