There is Hope: Nicole Atkins 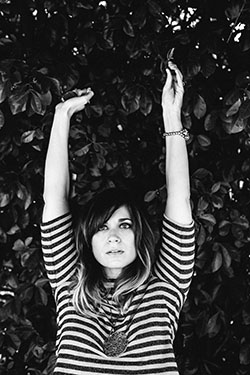 For several years, Nicole Atkins has been poised on the brink of stardom. In 2006, she was named one of 10 Artists to Watch by Rolling Stone magazine. Last year, she was featured on an American Express commercial and recently released her first album, Neptune City, on Columbia Records.

Why she hasn’t graced Billboard’s Top 10 is a mystery. And a travesty.

Blending folk, rock and sometimes Vaudevillian sounds, the New Jersey native has been hard to categorize by music critics, who compare her music to Roy Orbison, Patsy Cline, Jeff Buckley and the girl groups of the 1960s.

One thing is certain: Atkins pours her heart and soul into both the songwriting and performing, creating songs that are both melodic and powerful.

Neptune City is just as diverse: The first track, “Maybe Tonight,” is a pop gem, with a dreamy, swirling feel amplified by Atkins’ soaring vibrato. “The Way It Is” is downright creepy at times, bringing to mind Angelo Badalamenti’s music from “Twin Peaks.” And the title track sounds like the finale of a Broadway show or classic movie.

Things are looking up: Atkins played both SXSW and Bonnaroo music festivals, and “Maybe Tonight” is now featured on an Old Navy commercial. And Billboard? Neptune City reached No. 20 on Billboard’s Top Heatseekers chart.

I had a chance to ask Nicole Atkins a few questions after her recent tour of Europe.

Hooks and Harmony: How has the reception overseas been compared to the United States?

Nicole Atkins: People overseas really listen very attentively, which at first I mistook for indifference but later learned that they just have a more mild demeanor than people in the U.S. People in the States just get drunk and dance and scream at your shows whether they know you or not.

H&H: I’ve read that you’ve cited 60s girl groups as a major influence. in describing your sound. What do you think made this era of the Brill Building/Wall of Sound so unique?

NA: I’ve actually never cited that as an influence; people have put me in that genre. I actually stumbled upon the girl group sound early on when neither I or my producer David could play lead guitar very well, so I sang and harmonized all the “guitar solos” and then came to the conclusion that it made a girl group sound. It was a happy accident.

H&H: In your interviews, you claim to not have much musical training, but your melodies seem so natural, and the chord progressions (especially on “Maybe Tonight” and “War Torn”) are quite inventive. How do you create your music?

NA: It all just happens in my head, very randomly, mostly at strange times, the melodies. I keep a little recorder on me or sing the melodies into my cell phone. I save up all the snippets and work on them later, starting with fake words and then figuring out chords and then the layers of sound will show themselves. It’s like a puzzle. It’s fun.

H&H: My blog is about “one person’s search for melody and meaning in an atonal, hip-hop world.” What’s your opinion of today’s “popular music”?

NA: I’m with you! It’s sad that popular music is devoid of any romance and melody and guts. BUT, there are a ton of great bands around now that might not be that popular, but will keep music and just keep the faith that they can change that someday. Radio supervisors need to get their head out of their asses and realize that “modern rock!” is not Pearl Jam. That was 13 years ago! Let’s celebrate the present!

H&H: What’s the one thing that keeps you writing and performing music?

NA: It’s the only thing I truly love to do. I love music so much and I love the fact that I can finally make music I would actually wanna listen to myself. Nothing is better! For me anyways.