There is Hope: The Explorers Club 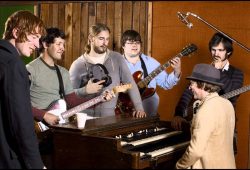 Tasty World in Athens, Ga., is not so much a bar as it is a two-story dichotomy. The first floor is a veritable meat market, with UGA freshmen girls dancing, socializing and showing lots of bare shoulders. (Where are their coats? It’s 15 degrees outside. I sound like their father. Come to think of it, I’m old enough to be their father. Nevermind.) A DJ mixes some tunes from his MacBook; all I can hear is thump, thump thump. It’s where the beautiful people hang out. And I’m hating it.

The upstairs entrance is almost an afterthought, separate from where the beautiful people mix. As I arrive on the second floor, I’m met with dark hardwood floors, pool tables and the misfits. Everybody upstairs thought before leaving the house, because they’re still wearing coats; in fact, a majority still have their ski caps on. Many of the guys are sporting full beards – we’re talking Orthodox Jew full; is that a fad? – and thick-rimmed glasses. I, in my saggy jeans and 30-year-old Miami Dolphins knit cap, fit right in. I am a loser. But I don’t care. The Explorers Club is onstage.

The seven-member band from Charleston, S.C. are right at home upstairs at Tasty World. The de facto leader and songwriter, Jason Brewer, is rotund and wears a Donald Duck sweatshirt.  Chris Mondia, the bass player, has Lennonesque mutton chops and wears a British driving cap. But see, it doesn’t matter. Image? Pfft. These guys make good music, and that’s what has everybody’s attention. Brewer and the band have managed to channel Brian Wilson and the Beach Boys, from the intricate harmonies and effortless falsettos to the soaring Pet Sounds arrangements. They have also captured the essence of summer, cars and girlfriends without mentioning the word “surfing.” I don’t think of tacky cabana shirts when I hear them.

The Explorers Club are crammed onto a stage the size of a dorm room. But as they kick into their single “Do You Love Me?”, I see them concentrating to hit the difficult five-part harmonies that have come to epitomize the Beach Boys sound. They hit it every time. And almost immediately, I begin to smile. I appreciate their craft, their attention to perfection. And for the next hour, I am truly happy.

“It’s all about the mood,” says Brewer, who is gracious enough to spend a few moments with me after the set. I’m poking his brain, wondering if he has discovered some secret to writing the perfect pop song. Several perfect songs are on their first full-length CD, Freedom Wind. But if there’s a secret, he’s not revealing anything. “You have to find the right chords to fit the mood you want,” he says, as if anyone can do it. And it does seem to come naturally to him, but his musical brain has been shaped by years of listening to Brian Wilson, the Zombies, Elvis Presley and Burt Bacharach. Perhaps the secret has been etched unconsciously onto his brain.

As we talk, members of the band pass by, smiling and expressing their appreciation that I came out. These guys are just plain nice. They’re not in it for money, fame, girls or drugs; they enjoyed the set as much as I did. “We truly get a kick out of playing for people who really appreciate music,” Brewer says, mentioning that they’ve played for audiences of all ages. As I lament what’s going on downstairs, keyboardist Stefan Rogenmoser grins and remarks, “During one of the breaks, I heard ‘I Kissed A Girl’ playing downstairs.” I wince. Why are there more than twice as many people in the meat market as there are upstairs?

Brewer shrugs. “You don’t hear a lot of strong melodies in today’s music. People want their music to be simple. They’re casual listeners.” But while it may take a true appreciation of music to hear the Wall-of-Sound production and isolate the leading voices in the harmonies, the songs as a whole are stunning and melodic. And they infect your brain.

The Explorers Club sounds like the Beach Boys. A lot. Does it bother Brewer to get constantly compared to them? He dismisses it outright. “I don’t care. Who wouldn’t want to be compared to someone like Brian Wilson?” Simply put, he hears something he likes, and he tries to emulate it. I guess that’s part of the secret: Find something that works, lather, rinse, repeat. And what’s wrong with that?