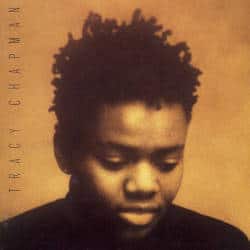 The Reagan/ Thatcher era of the 1980s drew its share of detractors in the music world — artists fed up with trickle-down economics and the heating up of the Cold War. Artists from Bruce Springsteen to U2 and Public Enemy all had political songs, some of which are still anthems today.

At that same time, musicians such as the Indigo Girls, Suzanne Vega and Billy Bragg brought the folk movement back to life.

Centered in the intersection of those two styles was Tracy Chapman, a folk singer with a political message. And she slammed it over people’s heads, sometimes with very little nuance. Her message was strong, talking openly about revolutions, violence against women and war.

Chapman was discovered by Brian Koppelman, a fellow student at Tufts University, who heard her perform at a local coffeehouse. He contacted his father, who was a music publisher, and they shopped around her demo tape to a host of record companies. Elektra was the only one who took a chance on the young singer-songwriter.

The bet paid off big. Tracy Chapman, her debut album, sold more than 6 million copies, and the first single off that album, “Fast Car,” reached No. 6 on the U.S. charts. That’s unheard of for a folk artist—especially in 1988, a year ruled by Madonna, Michael Jackson and Guns ‘n’ Roses.

Tracy Chapman is full of political messages. While she sometimes lacks the poetic style of Bob Dylan, her songs are full of emotion, her alto voice cracking as she sings with desperation and sorrow. The opening song, “Talkin’ About a Revolution,” though, is a strong and upbeat folk-rock anthem in which she proclaims that “finally the tables are starting to turn.”

The positivity is rare, for many of the other songs talk of homelessness, poverty and domestic violence. It gets the starkest on “Behind the Wall,” where Chapman sings a cappella and complains, “It won’t do no good to call / The police always come late if they come at all.” On “Why?”, an angry rock anthem, she asks, “Why are the missiles called peacekeepers / When they’re aimed to kill?”

Chapman can be sentimental, though, and her love songs are what make this album. “Baby Can I Hold You Now” is touching and loving, so much so that Boyzone and Ronan Keating created their own versions, and Nicki Minaj got sued for using part of it.

“For You” is Chapman at her most vulnerable — the artist who comes out and calls things the way they are laments, “No words to say, no words to convey / This feeling inside I have for you … Leaving me at a loss for words to express my feelings.” The accompaniment is just an acoustic guitar, and its effect is soothing.

Perhaps the biggest surprise on the album is the song that launched Chapman into the national spotlight. “Fast  Car,” the most unlikely hit of 1988, is a depressing song about poverty and relationships that ambles along at a slow pace but still managed to climb to No. 6 on Billboard’s Hot 100.

The song is mesmerizing, complex and full of contrasts; her lover ignores their kids and turns to alcohol as she tries to support the family, and she remembers times when they were driving in his car at “a speed so fast I felt like I was drunk.” But in the end, she challenges him, singing, “You got a fast car / But is it fast enough so you can fly away?”

On Tracy Chapman, the singer manages to revive the ghosts of Dylan, Mitchell and Baez while exposing her own fears and desires. It’s a fine line, being so confident and yet so unprotected at times. Chapman does it perfectly.