‘True Faith’ by New Order Is One Weird Video 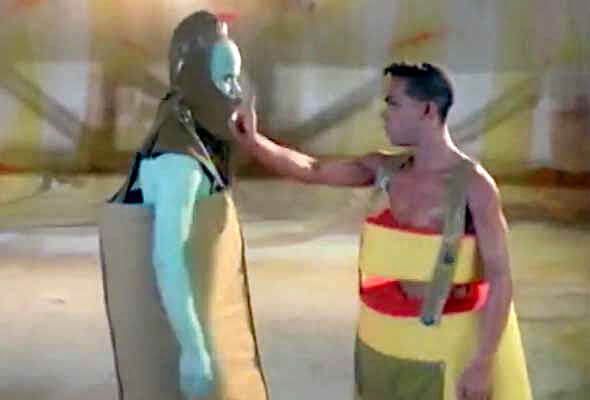 New Order had a song called “Bizarre Love Triangle,” but clearly the most bizarre thing about New Order was their music video for 1988’s single “True Faith.”

Wikipedia describes it as “surreal,” but that’s understating. The opening shows a man with sea-green skin and a pointed trash bag on his head, wearing what looks like a barrel, and a normal-looking man (also wearing barrel-like apparel), and they’re slapping each other — in sync with the beat, no less! But there is a method to this madness. It’s a reference to performance artists Marina Abramovi? and Ulay’s 1977 short, Light/ Dark, which features, well, people slapping each other.

I’m not doing it justice. Suffice it to say that the rest of the video features a copper-colored girl with no legs (wearing headphones and what looks like a turtle shell) signing the lyrics as she sways in a circle, people in puffy colored suits bouncing on trampolines, a wrestling match, and oh yeah — every once in a while, the band. Mix these visuals in random order, and you have the video for “True Faith.”

The video was choreographed by Philippe Decouflé, a dancer, mime and theater director. It won Best Music Video at the 1988 BRIT Awards. Bernard Sumner of New Order says the video is about drug use. If that’s the case, the video is one long drug trip. Unfortunately, the lyrics don’t explain the weird concept in the video, nor does the video explain the lyrics.

See for yourself. The song is great, but I still have nightmares about this video. Yeesh.