What Happened to Culture Club? 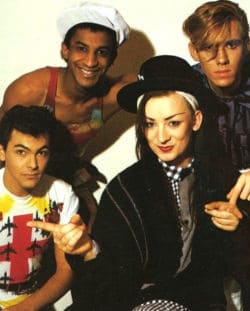 Like them or not, Culture Club were trailblazers during the 1980s, from the gender-bending antics of lead singer Boy George to their carrying the British flag over to America during the Second British Invasion of the early- to mid-1980s.

With five Top 10 hits in less than three years, the band fought Duran Duran for the title of the most successful New Wave artist. They scored a worldwide smash with “Karma Chameleon,” and won the 1984 Grammy Award for Best New Artist.

Two years later, they had disbanded and were all but forgotten, outmoded and outdated.

What happened to Culture Club?

In 1986, things seemed to be looking up. Culture Club had just released their fourth album, From Luxury to Heartache, and the lead single, “Move Away,” had reached the U.K. Top 10 (No. 12 in the U.S.). But subsequent singles didn’t fare as well, and the album didn’t even go gold in America.

About that same time, the secret love affair between Boy George and drummer Jon Moss went sour, and George had turned to drugs. In 1986, he pleaded guilty to heroin possession in London. It proved to be the final straw, and the group broke up that same year.

Culture Club first attempted a reunion in 1989, three years after they broke up. They went into the studio and recorded a few songs, but George was too distracted with his budding solo career to put much into it. The plans were scrapped, and the songs remain unreleased.

Then in 1998, the band reunited for a concert tour. It was a huge success, and they released a compilation album called Greatest Moments based on an episode of VH1’s Storytellers. A single from the album, “I Just Wanna Be Loved,” went to No. 4 in the U.K. Spurred on by the album’s success, Culture Club released a studio album, Don’t Mind If I Do, in 1999, but it flopped.

The band kept touring through 2002 but went on hiatus again when George’s career as a DJ took off. But with the newfound success came more notoriety in the public eye and with law enforcement. He was arrested in New York in 2005 for cocaine possession and falsely reporting a burglary. The cocaine charge was dropped, but he pleaded guilty to the false burglary reporting charge. He was sentenced to five days of community service and the paparazzi had a field day taking photos of him picking up garbage for the New York City Department of Sanitation.

Two years later, in 2007, he was arrested again, this time for assaulting and falsely imprisoning a male escort by handcuffing him to a wall and beating him with a metal chain. He was convicted and sentenced to 15 months in jail but was released after four months for good behavior.

In the midst of all of George’s legal troubles, Moss and Craig tried a reunion in 2006 without him and Hay. To replace George, they hired Sam Butcher, a singer with the same colorful style and androgynous image. George heard a demo and slammed the 29-year-old replacement’s performance publicly, and Moss and Craig quickly shelved plans to tour.

After a few shows in 2011, the band reunited — again — in 2014 and planned a new album and tour. They recorded 18 new tracks for the album, tentatively called Tribes, and scheduled it for a 2015 release, but it never hit record stores. They also postponed the tour when George was diagnosed with a polyp on one of his vocal cords. After he recovered, they toured in 2015 and 2016.

Two years later, a reworked version of Tribes, featuring some songs from the album, was released. Entitled Life, it was marketed as “Boy George and Culture Club.” George’s voice was deeper and a bit more seasoned, and the music showed touches of the band’s individual forays into dance music, but they kept their reggae and soul roots. It received generally positive reviews. 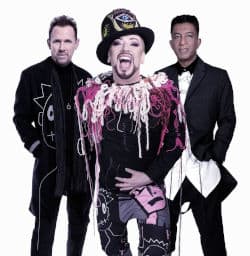 The band toured the U.S. and Europe in 2018 in support of the album. Jon Moss was originally part of the band but didn’t take part in the tour of Europe. A band spokesperson told Gay Star News, “Jon’s taking a break from Culture Club but the door is open in the future.”

But that wasn’t the whole story. In December 2019, Moss sued his bandmates, saying he was told to “take a break.” He sought nearly £200,000 in missing payments. George, perhaps stung by the lawsuit, said he did some thinking and talked with Moss, apologizing “for some things,” according to Retro Pop magazine. But for reasons known only to Moss, he left Culture Club in May 2021.