What Happened to Prince?

Yes, it’s my third post in a row on Prince. I just read two biographies of him (a third is on interlibrary loan), and the hyperfocus part of my ADD is in overdrive. Bear with me.

I recently listened to Prince’s entire catalog as I read his biographies, trying to put each album in context along with his recording process and his frame of mind during that time. And the same thing happened as it did back when I was growing up: After 1987, the quality of his musical output suddenly plummeted. Everything after Sign O’ the Times  – with the exception of a handful of songs here and there – was a big disappointment.

I put this question to the Prince loyalists at prince.org, and save for a few diehard fans (“Everything Prince puts out is awesome! Your (sic) on crack!”), most agreed that the 90s, 2000s and so far, the 2010s, has been a let-down.

The group threw out various theories, but several came to the surface (including one of my own): 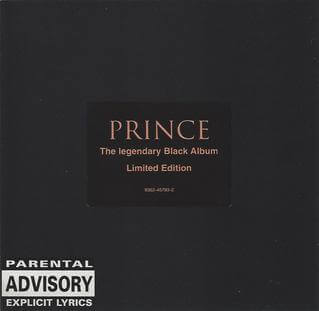 In 1988, after Sign O’ the Times, Prince worked on a funk album and told Warner to release it with no title, no album notes – nothing except a black cover. It was the now-mythical Black Album, or as Prince referred to it, the Funk Bible. It was at times profane, at other times violent and misogynistic. It was Prince at his most gangsta. Some interpreted this move as a reaction to fans’ complaints that he had become too pop-oriented.

Copies of The Black Album were pressed, wrapped, and on trucks, waiting to be distributed to stores, when Prince apparently experienced a revelation. Author Touré quotes some as saying that he was under the influence of a chemical substance with his girlfriend and protegé Ingrid Chavez when he suddenly freaked, hearing God tell him that the album was evil and should not be released. He got on the phone with Warner executives and pleaded with them to not only stop the release, but to destroy as many copies as they could (some copies had already leaked out to radio stations).

Prince quickly went back into the studio and churned out the overtly spiritual Lovesexy (although you could never tell from the cover and the title).  It received positive reviews, but was not as soundtrack for track as his earlier works. Although the Black Album was far from classic – when it was finally released in 1994, it received lukewarm reviews – something happened during this time, and it may have been this mini-religious conversion. His next album after Lovesexy, the Batman soundtrack, paled in comparison to his other albums. Perhaps he lost his edge (although he continued to use suggestive and profane lyrics in his songs).

Probability: A good story, but not likely.

Catching Up vs. Leading the Way

During the 1980s, Prince was a trailblazer. Dirty Mind was one of the best New Wave albums of its time – yes, New Wave – and Purple Rain bridged the gap between rock and R&B. Around the World in a Day, his next album, was eclectic, combining the Paisley Underground, Beatles, world music and funk into a wonderful mishmash. It was followed by the European-influenced Parade, which featured orchestras and piano interludes along with the usual Prince fare. The double album Sign O’ the Times, while disjointed at times, was the creative peak for him, as he used innovative production techniques to fuse rock, funk and R&B into a masterpiece (Read my original musings on Sign O’ the Times).

Starting with 1990’s Graffiti Bridge (the soundtrack to the awful sequel to Purple Rain) and continuing for the next few albums, one began to notice that no new sounds were coming from Prince. In fact, he seemed to be responding to and emulating the trends that were beginning to develop in music at the time. Hip-hop was becoming a force, as well as New Jack Swing, a fusion of hip-hop, R&B, funk and electronic drums (think Janet Jackson’s Control).

Many think he just ran out of creative juice and tried to make his music relevant by following the trends. The result was watered-down ballads and lite, rap-influenced funk that sounded tired and unoriginal. 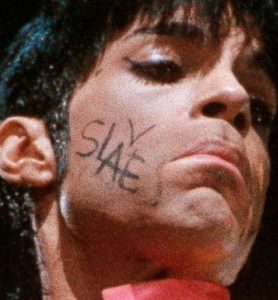 In the 1990s, Prince entered into a much-publicized feud with his record company, Warner Brothers. Warner wanted him to slow down the pace of his songwriting, releasing albums at a slower pace to give radio stations and fans a chance to embrace them before another one was released. But Prince would have nothing of it, preferring to go into the studio, churn out an album in a matter of days, and release it to the public. It turned so contentious that he changed his name to

, which confused DJs and fans alike, and started writing the word “SLAVE” on his cheek. He gave Warner tracks from his much-talked-about vault – rejects that didn’t make his regular album – just to fulfill his contractual obligations.

When he finally got released from his contract, the restraint was gone, and he spewed forth a triple album, Emancipation. One hundred-eighty minutes of music. The hose was on full blast, and no one was there to perform any quality control (“Er, Prince, this doesn’t sound like a radio hit…”). He released at least one album a year – sometimes three in one year – and the results were watered down. 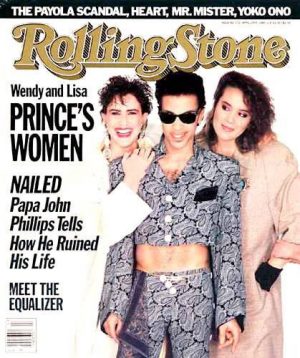 Keyboard player Lisa Coleman joined Prince’s band in 1980 and played a big role in creating the sounds of 1999. Guitarist Lisa’s friend Wendy Melvoin joined the band in 1983, shortly before Purple Rain. They stayed with Prince during his rise and contributed greatly to an unreleased album titled Dream Factory (Read my essay on Dream Factory). But Prince fired them and most of his interracial band shortly before Sign O’ the Times.

Is this a coincidence? Did Wendy and Lisa’s departure cause his creative decline? Probably not – his creative juices were flowing before Lisa showed up in 1980. But they introduced him to new sounds and probably challenged him musically during the 1980s; their absences were two fewer voices to give input to Prince during his writing and recording process.

Probability: Not a big reason, but it didn’t help him.

This isn’t to say that Prince is irrelevant. His recent appearances at this year’s Grammy Awards and Golden Globes earned him standing ovations, and his concerts continue to be sellouts.

I just wish his music was still as good as his legacy is.