What Happened to Men Without Hats? 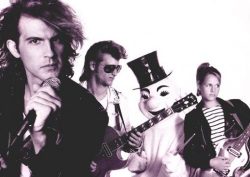 In 1983, Men Without Hats appeared seemingly out of nowhere (Canada, really) and inundated the airwaves with “The Safety Dance.” Led by lead singer Ivan Doroschuk’s robotic, baritone voice, the group hit No. 3 in the United States with the song, which was apparently not about safe sex or an anti-war song, but a protest against discos not allowing New Wave songs to be played (‘We can dance if we want to…”).

The video for “The Safety Dance,” which was some Renaissance vignette that featured a maypole, little people in jester suits and chicken masks, was played relentlessly on MTV. But would the group’s success last?

As with most groups, Men Without Hats didn’t immediately disband; they simply couldn’t climb that hill again to pop stardom. The group had no other hits from their debut album Rhythm of Youth, and 1984’s bizarrely named Folk of the 80’s (Part III) failed to chart as well.

They did spring back in 1987 with the album and single “Pop Goes the World,” which hit No. 1 in Austria and No. 2 in Canada, but it reached only No. 20 in the United States. A few more albums followed: 1989’s The Adventures of Women & Men Without Hate in the 21st Century, which featured a cover of ABBA’s “S.O.S.,” and 1991’s Sideways, which was more guitar-focused.

Polygram dropped them from their label, and the band broke up in 1993.

But as with most 80s bands, the story doesn’t end there. After 12 years and numerous side projects, Men Without Hats reformed with a new lineup. Their synth-laden 2003 album No Hats Beyond This Point was an ode to the New Wave sound of the early 1980s but failed to register, and in 2004 they broke up again. 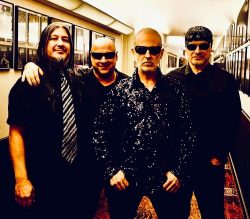 As part of the never-ending 80s revival, the group reformed in 2010 without Ivan’s brother Stefan and toured with the Human League in 2011; it was basically a solo act at this point, with Ivan hiring backing musicians to play with him at music festivals. In 2012, he released Love in the Age of War under the Men Without Hats name, trying to recreate that magic from 1983. It failed.

Men Without Hats kept riding the nostalgia bandwagon, though, touring with Howard Jones and Berlin in 2013, then with Martika, Naked Eyes and a Flock of Seagulls in 2016. They continued touring in 2018 and 2019, with a few dates scheduled for 2020 and 2021.

But they will always be the creators of “The Safety Dance” and its bizarre video. They’ve been featured on “The Simpsons,” “Family Guy” and “Glee.” “The Safety Dance” was used in a Lipton Iced Tea commercial featuring Hugh Jackman, and the main riff from “Pop Goes The World” is now a popular cheer at soccer stadiums worldwide.