What happened to Taco? 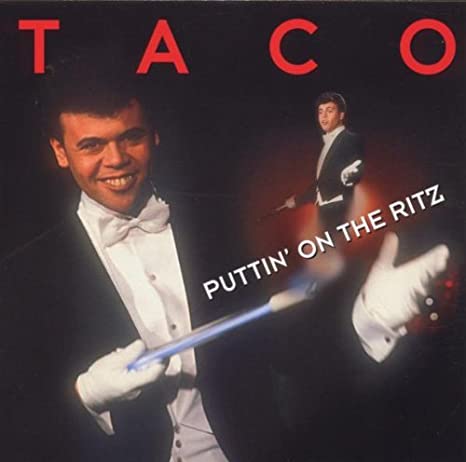 Taco Ockerse, otherwise known as just Taco, was the ultimate throwback artist of the 1980s. He took a 55-year-old song, Irving Berlin’s “Puttin’ on the Ritz,” and made it an unlikely top 10 hit in 1982.

Singer Taco was also the ultimate one-hit wonder; “Puttin’ on the Ritz” was ranked Number 53 in VH1’s 100 Greatest One Hit Wonders of the 80s. No one had ever heard of him before the song was released, and we heard very little from him after the song fell out of the Top 40.

So whatever happened to Taco?

Born in Indonesia in 1955 to Dutch parents, Taco Ockerse burst onto the music scene in 1982 with “Puttin’ on the Ritz,” which reached Number 4 on Billboard’s Hot 100. It was certified Gold by the RIAA for selling over 1 million copies.

In the video for the song, Taco, looking a lot like Tim Curry, pranced around in a white tie and gloves, mixing in other Irving Berlin classics such as “There’s No Business Like Show Business,” “Alexander’s Ragtime Band” and “White Christmas.” How it became a top 5 hit is still a mystery.

Taco was fascinated with old-time songs. His second single, “Singin’ in the Rain,” peaked at Number 46 in Canada but failed to chart in the United States.

He continued to look for success in classic Tin Pan Alley tunes. His follow-up album, Let’s Face the Music, was released in 1984 and featured such songs as “If You Knew Susie (Like I Know Susie)” and “They Can’t Take That Away from Me” as well as a song called “Opera-Rap.” It reached only Number 58 in West Germany.

He released Swing Classics/In the Mood of Glenn Miller in 1985 and Tell Me That You Like It in 1986, both of which did nothing. In 1987 he recorded the self-titled album Taco.

He didn’t give up. In 1989, he released two dance tunes, “Love Touch” and “Got to Be Your Lover.” After that, he concentrated on an acting career, appearing on television in Germany and starring in several theatrical productions.

As with most 80s artists, Taco experienced a rebirth – twice. In 2009, he performed “Puttin’ on the Ritz” at the Olympic Stadium in Moscow and then brought in 2010 in Russia with an encore performance on television. He re-recorded his hit single that year and again in 2017 – the 35th anniversary of the original release. Titled “Puttin’ on the Ritz 2017” (of course), the song had an electro-swing vibe.

Taco lives in Germany and still performs at galas.

Who says you can’t ride the tuxedo coattails of a song for 35 years? Taco certainly has proven that you can.