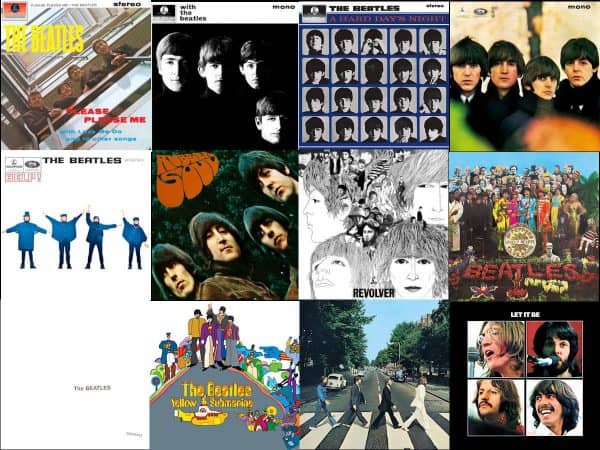 What’s the best Beatles album? That’s like picking your favorite child. There are too many to name, and to choose one would be tantamount to treason. The Beatles have four — count ’em, four — albums in Rolling Stone‘s Top 10 Albums of All Time, and 10 in the Top 500. That’s tied with the Rolling Stones and second only to Bob Dylan.

So how does one choose from such jewels as Please Please Me, A Hard Day’s Night, Rubber Soul, Revolver and Sergeant Pepper’s Lonely Hearts Club?

Some people are Beatles purists, liking everything they’ve done from the first album all the way through Let It Be. Others prefer one Beatles over another — the one before they smoked pot with Bob Dylan (before Help!) and the one after they smoked pot. One can definitely sense a change in their songs; they became more mellow, more complex, with more obscure lyrics.

I definitely prefer the stoned Beatles, especially after they discovered LSD (about the time of the Revolver sessions). Even Rolling Stone agrees, for three of the four Beatles albums in their Top 10 are in this era, and all four of their selections were ones after the Beatles smoked marijuana.

Enough about drugs. To start our search for the best Beatles album, let’s go through each of their 12 studio albums, ranked from worst to best:

Recorded quickly following an exhausting tour, Beatles for Sale easily could have been an EP. Instead, the Fab Four threw together six cover tunes to round out the tracklist, and their inclusion hurts the album, which is anchored with strong songs such as “Eight Days a Week,” which is simply perfect, and “I’ll Follow the Sun.”

Yellow Submarine is an album that was needed for a cartoon, and the four had to rush to get something together. There’s nothing really here except if you don’t have a copy of “All You Need Is Love.” Even the title track can be found on Revolver.

“Hey Bulldog” has its moments, but the rest is thrown together, with George Martin composing almost all of the songs on Side 2. John Lennon later called Martin’s orchestral songs “all this terrible shit.” I’ve deleted them from my music library, and Yellow Submarine is now a mediocre EP.

It’s never good to release two albums in a year, but that’s what the Beatles did with their quick follow-up to Please Please Me. This time, to fill the songwriting void, they added seven cover songs. This time, some actually work, like “Till There Was You” and “Money (That’s What I Want).” Add to that a famous Beatles classic, “All My Loving,” and a strong opener, “It Won’t Be Long,” and you have the beginnings of a good album.

The fact that an album like Please Please Me is No. 9 on this list shows how many great albums the Beatles had. Rolling Stone ranked it 39th among the 500 Greatest Albums of All Time. Still, the album lacks a certain cohesion, caused mainly by the inclusion of six cover songs. The Beatles still sound a bit raw and unpolished, but compositions such as “I Saw Her Standing There” and George Harrison’s “Do You Want to Know a Secret” hint at what’s to come. And of course, one of the cover songs is the group’s famous interpretation of “Twist and Shout,” whom many mistake for one of the group’s own.

The album that accompanied the Beatles’ first movie is also the first that didn’t include a cover song. It’s a true Beatles release, and their songwriting and playing seem to show a bit more sophistication and complexity, from the impossible-to-play opening chord of the title cut to Harrison’s use of a Rickenbacker 12-string electric guitar. Side 1 is almost perfect, ending with the infectious “Can’t Buy Me Love.” But Side 2 suffers by comparison, with filler from Lennon completing the album.

Let It Be is painful to listen to, for it’s the sound of the Beatles breaking up. By 1969, Paul was firmly in control of the band, and a mutiny was starting to occur. The Get Back sessions showed outright feuds between some of the members, and a camera crew was there to capture it all.

As a result, Let it Be, their final release (not the final album recorded) sounds disjointed and phoned in. The production is terrible, made worse by Phil Spector’s orchestration on some tunes, and it ruins such beautiful songs as “Let It Be” and “The Long and Winding Road.” Still, there are nuggets — hints of what could have been. “Get Back” is roots-driven rock ‘n’ roll, and songs such as “Two of Us” and “I’ve Got a Feeling” are brilliant if not forgotten.

Help! continues the Beatles’ maturation as performers and songwriters. The title track features John Lennon at his most personal yet, and the use of acoustic guitar on songs such as “You’ve Got to Hide Your Love Away” and “I’ve Just Seen a Face” show the group’s depth. Of course, Paul McCartney’s “Yesterday” rounds out the album, and you can’t get much better than that.

Some Beatle historians believe The Beatles (a.k.a. the White Album) would have been much better as a single disc than a double album, and I agree. That way we could get rid of such trash as “Revolution 9,” “Wild Honey Pie,” “Piggies” and “The Continuing Story of Bungalow Bill.” George finally brings his “A” game with “While My Guitar Gently Weeps,” and Paul and John’s acoustic endeavors make it worthwhile. But you’re hearing four distinct musicians on this album, not a band. It’s like a compilation instead of a group effort.

Sergeant Pepper was ranked as Rolling Stone‘s Greatest Album of All Time, but it sounds the most dated. It’s the Beatles at their psychedelic peak, and it shows. It’s almost too eclectic, with circus music, sitars, harps, and yes, even some filler. “A Day in the Life” ranks up there as one of the greatest Beatles tracks ever, as does “Lucy in the Sky with Diamonds,” but it’s brought down by George’s “Within You Without You,” “Fixing a Hole” and “Being for the Benefit of Mr. Kite.”

Rubber Soul is considered to be the first among the pantheon of classic Beatles albums. It inspired Brian Wilson to create Pet Sounds. It is cited by many as the beginning of the psychedelic era, with Harrison’s sitar on “Norwegian Wood” a prime example. Lennon continues to get personal with his lyrics on “Nowhere Man” and “In My Life.” Critics say it’s the first album that was thought of in its entirety instead of a collection of individual songs.

From the opening biting guitar chords of “Taxman” to the sweeping orchestral touches of “Eleanor Rigby” and the psychedelic “Tomorrow Never Knows,” Revolver is almost perfect. “Here, There, and Everywhere” may be McCartney’s most beautiful ballad. Lennon is at his poppiest with “And Your Bird Can Sing” and “Doctor Robert.” The only blanks are George Harrison’s droning sitar on “Love You To” and Ringo Starr’s droning on the popular but childish “Yellow Submarine.” That brings it down a notch or two.

Abbey Road is a sweeping masterpiece. Everyone is at the height of their songwriting talents: Lennon’s spooky, acerbic “Come Together,” McCartney’s plaintive screaming on “Oh! Darling!,” Harrison’s sublime contributions, “Here Comes the Sun” and “Something,” and even Ringo Starr’s composition, “Octopus’ Garden.”

The medley on Side 2 takes pieces of songs that they hadn’t finished and incorporates them into a fitting epilogue for the band, and Paul’s “The End” is a perfect ending.