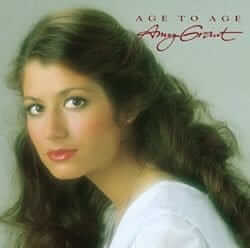 In the early 1980s, Amy Grant was a giant in contemporary Christian music. Her soft, acoustic-driven gospel music reached millions of Christians who embraced her and artists like Petra, Sandi Patti and Michael W. Smith. She led a resurgence in gospel music, and she was the first Christian music artist to make headway into the Billboard Hot 100 when her single “Find A Way” reached number 29 (and number 1 on the U.S. Christian chart) in 1985.

After another crossover album, she then took a dive straight into contemporary pop music, hitting number 1 on the Hot 100 the next year with her duet with Peter Cetera, “The Next Time I Fall.” Other hits followed, but she became known as a lightweight, with songs such as “Baby, Baby” and “Every Heartbeat.”

So why do I like her so much? And why do I feel guilty about it?

Part of it has to do with her clean-cut image; songs such as “Father’s Eyes” and “El Shaddai” were sweet, innocent and full of references to religion. It’s clear why she was a darling of contemporary Christian radio, but there was no room at the time for religion in pop music.

The transformation of Amy Grant

She then changed her image to fit the more upbeat artists emerging from contemporary Christian artists, adopting a more rock image, and that’s when I found her. I liked the idea of having a Christian hitting the pop charts, and “Find a Way” was a pop gem, its watered-down lyrics having just enough appeal to mainstream America while still winking at her old fans.

I found out later she even borrowed a song from one of my all-time favorite bands, The Innocence Mission – “Shadows,” from the group’s debut EP Tending the Rose Garden. Although not one of The Innocence Mission’s best songs, she gets a plus for including such an underrated group in her catalog. I hope the group is still getting royalties.

By far, though, the best song on the album is Jimmy Webb’s “If These Walls Could Speak.” Accompanied only by a piano and strings, Grant’s heartfelt voice sounds so earnest and comforting. It’s kept me sane, peaceful and introspective through many trying times over the years, and is a staple on my Autumn playlist; it remains one of my all-time favorite songs.

Yes, after Lead Me On, she went pure pop, and there’s plenty to poke fun at if you don’t like white-bread Top 40 music. But for a few years in the mid-1980s, she was at her peak artistically. I still respect all that she does – especially her crossover appeal. That’s not an easy thing to do. And her Christmas albums are the perfect soundtrack for December.

Not bad for the singer of “Baby, Baby.”