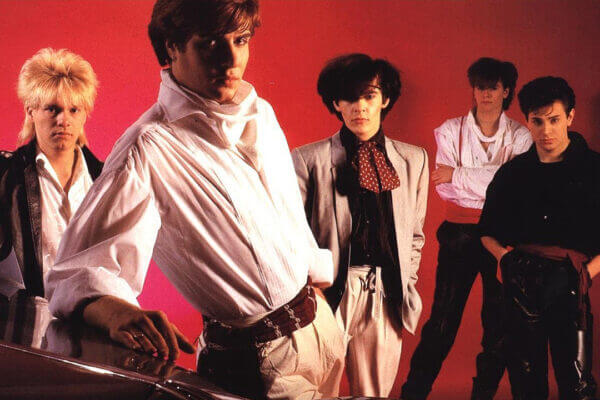 In 2012, The Guardian music journalist Paul Morley expressed his hatred for Duran Duran, claiming that he had always despised the five-man band from Birmingham, England ever since they came on the scene in 1981. “I hated them from the point of view of a rock critic taking pop seriously, even when it was just for fun,” he wrote. “They fancied themselves as not so much the made-up boy band they clearly were…but as Peel-listening pop conceptualists mixing the Sex Pistols with Chic.”

Even music critic Rob Sheffield, in his book Talking to Girls About Duran Duran, admits that even though he’s a Duran Duran fan, he is pretty sure “Duran Duran would cease to exist if girls ever stopped talking about them.” Yes, girls fawned over the group during the early 1980s, buying up issues of Tiger Beat with Simon LeBon, Nick Rhodes and the three Taylors’ mugs all over them, tending to lend credence to Morley and Sheffield’s assertions.

They were partly cover boys, and that made the male crowd instantly dislike them if not because they were losing their girlfriends’ attention to them, then because they didn’t want to seem gay (which was still taboo in the early 1980s). And if you really want to know, no one in Duran Duran has ever announced that they were gay. Even Nick Rhodes, who still sports lipstick and mascara in his late 50s, was married and has had several long-term relationships with women.

Still, all those guys who were Journey fans did not hide their dislike for the fashion-conscious, makeup-wearing quintet, who admittedly stole the look from glam rockers such as David Bowie and the New York Dolls. Perhaps they felt threatened by Duran Duran because their girlfriends fawned over them; a few tough guys were probably even attracted to them.

I was an outlier. Like Sheffield, I could not hide my admiration for Duran Duran. Even though they were treated as sex symbols by females worldwide, the band worked hard to create infectious pop music that was based in New Romanticism but at times bordered on funk. (Where Morley got the Sex Pistols self-comparison is beyond me.) They focused on upbeat, sometimes complex music based on Nick Rhodes’ synthesizers, John Taylor’s intricate bass playing and Roger Taylor’s pounding drums.

Everything they touched turned to gold. “Is There Something I Should Know” had Simon LeBon pleading, “Please, please tell me now” in a chorus that was pure ear candy. “Hungry Like the Wolf,” which stalled at No. 3 behind “Billie Jean” and “Do You Really Want to Hurt Me?”, had a funky beat, a memorable guitar riff from Andy Taylor and sing-along “doo-doo-doo”s in the verses if you didn’t understand all the lyrics.

And the hits kept coming: “Rio,” “Save a Prayer,” “The Reflex,” “The Union of the Snake,” and “New Moon on Monday.” They lost their way with “The Wild Boys,” a hollow, sparse single with primal shouting, but found a new sound with the funky Nile Rodgers-produced “Notorious.” Critics consider their song from the James Bond movie “A View to a Kill” one of the greatest James Bond themes ever.

In a way, their career has mimicked the Beatles, although their career has lasted four times longer. In the beginning, the Beatles were dismissed as teen sensations but still wrote their own pop jewels. Their sound evolved, and so did Duran Duran’s. Duran Duran survived separate side projects (Arcadia and The Power Station) and the departure of several band members, several times recording and releasing albums as a trio.

The band opted for more ballads in the early 1990s, which seemed to signal some mellowing as middle age kicked in, but throughout the 2000s they rode the New Wave nostalgia and released several high-energy tracks that, if not successful, showed that they were not entirely irrelevant (“Too Much Information,” “(Reach Up for the) Sunrise”).

I didn’t own any Tiger Beat magazines, but Duran Duran’s hooks and Le Bon’s ability to carry a melody to its fullest potential made me a fan. I searched for more bands like them, but couldn’t find anyone with enough depth and soul. Yes, depth and soul. Their lyrics were at times obtuse and bordered on corny (“You’re about as easy as a nuclear war” and “it means so much to me / Like a birthday or a pretty view”), but early on, the Beatles proclaimed, “Love, love me do / You know I love you.”

But unlike the Beatles, Duran Duran are survivors. They have not let infighting and grudges break them fully apart, only to appear on a “Bands Reunited” episode on VH1.

A few years ago I attended one of their concerts and found myself in a distinct minority, with 40- and 50-something women screaming their lungs out at every song and acting like they were still hugging their Tiger Beat magazines.

The concert was full of energy and pizazz, and the 50-something rock stars didn’t act their age, playing songs from their full 40-year catalog of hits.  They even performed an explosive version of Grandmaster Flash’s “White Lines,” complete with snarling guitars that made the original seem tame and confirming my suspicion that this band was more than just eye candy. The band has talented, experienced musicians who have churned out memorable, infectious melodies that made people dance and yes, occasionally faint.

I hope they continue to do so. And I’m not ashamed to say that.