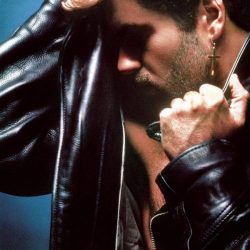 Georgios Kyriacos Panayiotou, otherwise known as George Michael, was never one to stay in the middle for very often. He was polarizing — men hated him for his good looks, women swooned. but during his 35-year career — okay, let’s face it: It was more like a 10-year career — he had eight no. 1 hits and sold 80 million records both as a solo artist and as a member of Wham!

1990’s masterpiece, Listen Without Prejudice Vol. 1, was his attempt at being taken seriously as an artist, for his time with Wham! didn’t garner much respect. But you can’t deny their success.

He and Andrew Ridgeley had already topped the charts several times in the U.K. before the amazing “Wake Me Up Before You Go-Go” was released, taking the world by storm. People laugh at it, and it was bubblegum, but such good bubblegum as to make you snap your fingers, sway your body and tap your feet as you wanted to “hit that high (yeah yeah).”

Other hits followed: “Everything She Wants,” “Freedom” and “Careless Whisper” (in which the now-famous saxophone solo even makes me cringe). We knew he had something special when he sang an unforgettable rendition of “Don’t Let the Sun Go Down on Me” with Elton John in 1985. And by this time, he was a rising star who simply didn’t need his musical partner anymore. Wham! broke apart, and Michael embarked on a solo career.

And what a career it was.

For four short years, he ruled the airways. “Faith” made Michael’s ass a topic of discussion, even spawning a Saturday Night Live skit:

But there was no denying the rockabilly hit, which went straight to no. 1, along with “I Want Your Sex,” which by today’s standards seems tame. Its most offending lyrics were in the title. But still, people complained; Casey Kasem wouldn’t even say the song’s title as it raced to no. 2 on the Billboard Hot 100.

Michael solidified his talent as a crooner, releasing “Father Figure,” a gospel-tinged ballad, and “Kissing a Fool,” a throwback to the old standards. And the album Faith topped the charts for months. But the media coverage of the album focused mainly on his ass and “I Want Your Sex,” and he feared not getting taken seriously as an artist. So he released Listen Without Prejudice Vol. 1 with the stark “Praying for Time” as the first single — a somber ballad in which the video featured only words on a screen deploring the injustices of the world. No leather jacket, no unshaven face, no denim-covered ass.

Other videos followed suit. “Freedom ’90” featured only supermodels lip-syncing to the song, and the words expressed Michael’s wish to come out of the closet:

Heaven knows I was just a young boy
Didn’t know what I wanted to be
I was every little hungry schoolgirl’s pride and joy
And I guess it was enough for me
To win the race? A prettier face!
Brand new clothes and a big fat place
On your rock and roll T.V.
But today the way I play the game is not the same, no way
Think I’m gonna get myself happy

Other songs seemed to struggle with his superstardom. The Reprise to “Waiting for That Day” seemed to have Michael baring his soul even more:

You look for your dreams in heaven
But what the hell are you supposed to do
When they come true?

His best album by far, Listen Without Prejudice Vol. 1 was George Michael the songwriter, with “Praying for Time,” “Waiting for That Day” and “Something to Save” being wonderfully crafted acoustic pop songs that relied solely on his skill as an artist – no drama, no controversy.

Michael did very little to promote the album, and sadly, it showed. It sold “only” 8 million copies, compared to Faith’s 20 million, and although “Praying for Time” hit no. 1, “Freedom ’90” made it just to no. 8, and “Waiting for That Day” didn’t even crack the Top 20 in the United States.

It was the beginning of the end.

A Long Way Down

Although a more upbeat sequel to Listen Without Prejudice (Vol. 2) was planned, it never evolved due to his fight with Sony Records. The album was supposed to have such songs as “Too Funky,” “Do You Really Want to Know” and “Happy” — songs that were donated to the charity album Red Hot + Dance. Older, his next album, barely sold 800,000 copies in the States.

Then came the drug allegations. The arrest at a rest stop in 1998. Michael was now the punchline to jokes instead of being taken seriously as an artist. He kept on through it, finally pronouncing what everyone already knew — he was gay — and becoming a champion for LGBT rights and HIV/AIDS awareness. Patience, his final studio album, sold only 258,000 copies in the United States. His last Top 10 hit was “Fastlove” in 1996. He died in his sleep 20 years later in 2016.

His music in the 80s and early 90s was sublime and captured the Zeitgeist of a generation. He yearned to be taken seriously as an artist, and when the restroom incident forced his sexuality into the open, he came out with “guns blazing,” said Martin Aston, a music journalist and author. His HIV/AIDS work is rivaled only by Elton John, and he made a difference not only in that fight but in paving the way for gay artists in general.

So there’s nothing wrong with liking George Michael. Laugh all you want. I’m going to Listen without Prejudice.