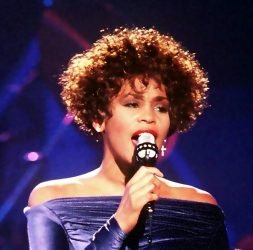 Like every other hormone-addled teen in the 1980s, I had a huge crush on Whitney Houston. She was cute, young and perky, and, at least at the beginning of her career, innocent. Sure, she had a nice voice – well, a great voice. But I think I was in love with her.

This admission is coming from a very white guy who grew up in northeast Georgia, where absolutely zero African Americans lived. I encountered racism quite a bit growing up, and it angered me. I argued with people so much about their attitudes that I was called a n— lover. But I didn’t care. I listened to Prince and Michael Jackson, and experimented with new sounds coming from artists such as Kurtis Blow, Newcleus and Run-DMC (I know, hard to believe).

But let’s face it, I’m pretty white bread. I liked Duran Duran, thought the British Invasion was the second coming of Jesus, and tried to dress and style my hair like David Bowie. And Whitney Houston played to me. She was a pop artist who didn’t care who listened to her music. Hell, the more, the merrier. Gold and platinum records are color blind.

Her first two hits were smooth and sexy ballads – “You Give Good Love” and “Saving All My Love for You” were smash #1 hits. But the upbeat songs at the time were pure bubblegum. “How Will I Know?” could have easily been a Debbie Gibson song, and “I Wanna Dance with Somebody” was right down the middle of the road – so much, in fact, that she was criticized by some African Americans as “selling out.” So much for Ebony and Ivory.

But the voice – oh, you could not deny The Voice. The Voice was not distinct, just amazing. If you heard an unfamiliar song performed by a female with an unworldly, angelic voice, your first guess was Whitney. Mariah? Christina Aguilera? Beyonce? All Whitney wannabees. And it was 100 percent her – no computer manipulation. As ickmusic tweeted last night, she was a “pure, real, natural voice of an angel. Suck it, you autotuned, talentless hacks today.”

After Whitney, I moved on to Sade and Anita Baker, and I continued to skirt around the edges of R&B for the rest of the decade. I left her, Prince and Michael Jackson toward the end of the decade as I plunged into the alternative music scene. I gritted my teeth during the “I Will Always Love You” phenomena (It’s on the radio again?) and shook my head at her incoherent babbling and bizarre antics during her drug-riddled phase with Bobby Brown.

I prefer to remember Whitney as she was on the wall of my bedroom in the 1980s (see above). Up until a few years ago, the poster was still hanging there along with U2, R.E.M., and my other obsessions from the 1980s, an African-American goddess among my Caucasian idols. On visits back to my parents’ house, I would go into my old room, and she would stare at me with those sultry eyes, still young but oh so provocative.

And I would smile, remembering my crush and silently thanking her for letting me love her.