Let It Be (Super Deluxe Version) – The Beatles (Album Review) 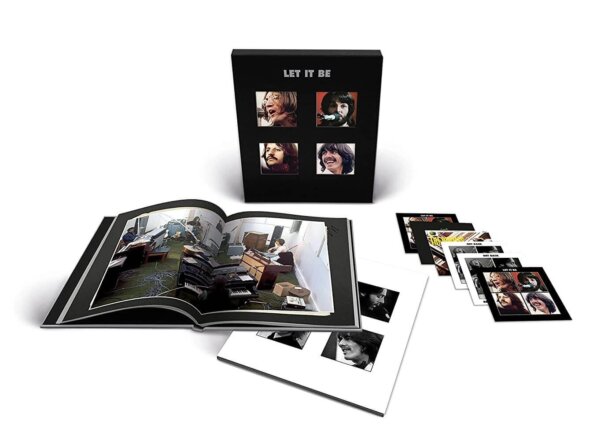 The Beatles are mostly legend now, with only two surviving members to tell the tales of Beatlemania and what it was like to be in the greatest band of all time. And those two — mostly Paul McCartney — are trying to cement that status by giving fans what they want by releasing more music. They’re also trying to repaint the bad parts in a new light. And apart from a few testy moments during the recording of the White Album, that bad part consisted of the recording and release of Let It Be.

Originally titled Get Back, the album was an attempt by the Fab Four to get back to their rock ‘n’ roll roots. They would create an album, record it, and give an impromptu concert—all while being filmed. It was the Beatles under a microscope, a chance for fans to peel back the layers and watch the masters in action.

The resulting film and album showed that the process, at least this time, was a train wreck. George Harrison quit under constant nagging from McCartney; John Lennon’s wife, Yoko Ono, was an awkward presence in the recording studio; and Ringo Starr just seemed bored. Michael Lindsay-Hogg’s finished film showed this uneasiness and downright hostility, and the album went through several changes before Phil Spector took the reins, added strings and choruses to several songs, and pissed McCartney off, further dividing the band.

The Beatles want to change that perception, so much that they gave all their footage to director Peter Jackson, who has promised a happier, more relaxed band during the six-hour documentary that will air later this year. It won’t be as boring as Lindsay-Hogg’s depressing movie, but you can’t hide lines like George saying sarcastically to Paul, “I’ll play, you know, whatever you want me to play. Or I won’t play at all, if you don’t want me to play. Whatever it is that will please you, I’ll do it.”

The latest task in Project Makeover is a deluxe version of the album Let It Be, which was recorded before Abbey Road but released 30 days after the band broke up. It includes a remix of the original album plus 45 demos and outtakes from the recording sessions.

The remix sounds better than the original, which despite Spector’s efforts still sounds like a bunch of demos. But the crisp layered tracks that we’re used to hearing from the band aren’t there; in its place are studio banter, false starts and half-hearted, sloppy vocals. No amount of wizardry can fix those things. It still sounds like a bootleg, with outtakes such as “Dig It” and “Maggie Mae” filling tracks in place of other songs that could have been completed: Harrison’s “Something” and “All Things Must Pass” or Lennon’s “Give Me Some Truth.” At least completists will finally possess a master-quality version of the original mix of Get Back produced by Glyn Johns, whose version was deemed too poor to release.

Beatles fans have debated for decades whether Spector helped or hurt the album. He was able to enhance the quality of some songs, but his orchestration ruined “The Long and Winding Road,” so much so that it was probably the primary reason McCartney pushed for the release of Let It Be: Naked, a stripped-down rearrangement of the album that in my opinion — and it’s not a popular one — is superior to any version of the original album.

It doesn’t help that with the deluxe version, we hear four different versions of “Get Back” and five different recordings of “Let It Be.” It’s not something to listen to all the way through. It’s for completists only. And it still remains the only flaw in the Beatles’ later catalog — a polished flaw, but a flaw nonetheless.