Why Is ‘We Built This City’ Hated? 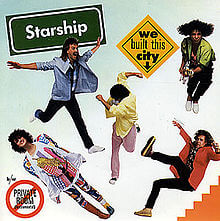 “We Built This City” gets a bad rap. There, I said it. It’s not even Starship’s worst song. Nevertheless, it’s a standard on everybody’s Worst Songs of All Time lists.

“We Built This City” was perfectly content with being a No. 1 Grammy-nominated song for about 20 years before it topped Blender magazine’s 50 Most Awesomely Bad Songs Ever in 2004.

GQ magazine declared it the worst song of all time, saying it was “the most detested song in human history.”

Ouch. Really? Why do people hate “We Built This City?”

Blender points to one line—”Marconi plays the mamba”—as making no sense, because Guglielmo Marconi, the inventor of the radio, wasn’t playing anything at the time, certainly not a poisonous snake from Africa. But when was nonsense lyrics the singular sign of bad music? Look at “Tutti Frutti,” “Da Doo Ron Ron,” and “Octopus’ Garden”—good songs with terrible lyrics. Even “Ob-La-Di, Ob-La-Da” was awarded the honor of being one of the most perfect pop songs ever.

There are lyrics with bad grammar in them. Even R.E.M. is guilty of some bad lyrics. But four words out of an entire song, and that’s your reason for hating it?

The video for ‘We Built this City’

Sure, the video is cheesy, with Abraham Lincoln’s statue coming to life and dancing and giant dice chasing fans. But again, what video wasn’t cheesy in the 80s? Was it worse than Journey playing invisible instruments in “Separate Ways (Worlds Apart)?” Worse than Billy Squier writhing around on the ground wearing a pink tank top in “Rock Me Tonite?”

Listening to the song, it just isn’t that bad. It’s deceptively catchy, with chords building over a C in the bass. It changes to a minor key for a few measures, then leads up to a chorus that gets in your ears and won’t leave. That’s not necessarily a good thing, but it’s something.

So why all the hate for “We Built This City”?

For one thing, the purists hated the musical direction the band was going. This was a band that was a mere shadow of their former 1960s hippie/psychedelic selves. They remodeled themselves time and again, first in 1978 when founder Marty Balin left the group, to be replaced by Mickey Thomas. They developed an arena rock sound, with hits such as “Jane” and “Find Your Way Back” hitting the top 20.

Grace Slick kept coming and going from the band, and when Paul Kantner left in 1984, she took control of the band and led it to a cash cow. Bernie Taupin (of Elton John fame) had written some lyrics to a song called “We Built This City.” Producer Peter Wolf (not of J. Geils fame) added the chorus, and it went through several iterations, finally ending up as the glossy anthem we hate today.

But the real reason is that “We Built This City” got singled out as the representative of typical 80s lite rock that was beginning to make the 80s a joke. New Wave was beginning to fade, and “We Built this City” was fodder for criticism along with other lite rock songs of that time: Mr. Mister’s “Broken Wings,” Glenn Frey’s “The Heat Is On,” Phil Collins’ “Sussudio” and Corey Hart’s “Never Surrender.” Starship has become the Nickelback of 1980s corporate rock.

Guilt by association? Perhaps. But you can’t point the finger at Starship without indicting a whole genre of music at that time. And I’ll listen to “We Built This City” before I’ll expose my ears to “Sussudio” again.

For what it’s worth, Starship’s No. 1 hit from 1987, “Nothing’s Gonna Stop Us Now” is 100 times worse than “We Built This City.” With syrupy lyrics—”And we can build this thing together / Standing strong forever”—shrill singing by Grace Slick, a key change (key change!), an uninspired guitar solo and an overly simplistic melody, it has it beat by a mile. I mean, it was the theme to the movie “Mannequin.” How much lower can you go?

Yep, I’m knee-deep in the hoopla.