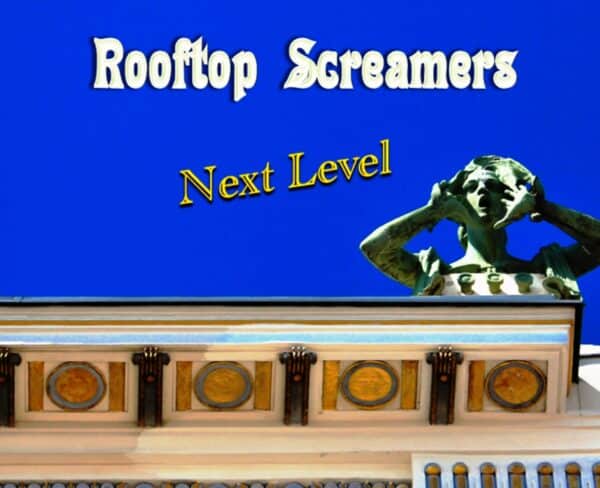 Mike Collins knows pop. The Portland, Oregon-based drummer and songwriter was a member of the power pop band Throwback Suburbia in the late 2000s and early 2010s. His studio project, Rooftop Screamers, debuted with its 2018 album Vol. 1, featuring collaborations with Ken Stringfellow (The Posies, R.E.M.) and Kyle Vincent. Collins writes the songs and plays drums but gets others to contribute vocals.

Three years later, Collins has resumed the project with Rooftop Screamers’ second album, Next Level. And he relies on an all-star cast to perform the songs, which makes it sound like a compilation of power pop music that takes you back to the 1980s and 1990s.

Tim Smith of Jellyfish/Umajets fame starts things off with “Buckle Up,” an upbeat song that shows Smith is more than just a bass player. The song is full of hooks and Beatlesque chord progressions; you only want to hear more after this.

Cy Curnin of the 1980s new wave standouts The Fixx lends his voice to Shifting Tides, and although it doesn’t sound like his earlier work, it does recall a bit of the 80s as Curnin sings, “You won’t change the world till you change your mind.” Dilana, a South African singer best known as the runner-up on the CBS reality TV show “Rock Star: Supernova,” does her best Melissa Etheridge impression on “Tearin’ It Down,” which sounds more like a 90s single than an 80s retread.

The cameos keep coming. Ken Stringfellow of the Posies comes back for the guitar anthem “One Wish.” Keith Slettedahl of The 88 leads the jaunty “Our Lucky Day.” And there are a few surprises. David Paton of the 70s group Pilot recalls his group’s smash hit “Magic” when he sings “Cause it’s magic when the train leaves the station” on “Your Day Will Come.” And even Collins himself shows he has some vocal chops on “Couldn’t Ask for More,” another feel-good pop song that will have your feet tapping.

Collins has a real talent as a songwriter; he easily could have made this a solo album, but the carousel of featured artists lends a bit of unpredictability to the album. Nowhere is this more apparent than on the final cut, “After the Fire,” where singer-songwriter Stephanie Schneiderman’s touching voice is perfect for a surprising ballad.

“It’s been a long goodbye. Think it’s time we end this ride,” she sings. It’s obviously about a failed relationship, but it’s a perfect epilogue for a collection of memorable pop songs.