That’s Why God Made the Radio, The Beach Boys 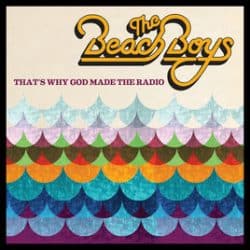 The Beach Boys 50-year history has been truly epic. It’s filled with fame, drugs, emotional breakdowns, death, and flashes of brilliance offset by the cancer that is Mike Love.

Their creative peak, 1966’s Pet Sounds, rivaled the Beatles’ best work, weaving remarkable harmonies around complex orchestral arrangements; at their lowest, without Brian Wilson, they were a washed-up cover band that reminded everyone that fast cars and surfing are fun!

That’s Why God Made the Radio is the first studio album by the group in 16 years, and the first to feature new material since 1992. And let’s hope it’s their last – not because it’s so bad, but because it is the soundtrack to the band’s career, conjuring ghosts of the past and reminding us of both the good and bad.

This album is mostly Brian Wilson, the architect behind almost every Beach Boys hit during their heyday, the brainchild behind Pet Sounds and the wonderful failure that was Smile. The opening cut, “Think About the Days,” has no words and few backing instruments – it’s mostly acapella heaven, with Wilson recalling how he and his now deceased brothers, Carl and Dennis, began their musical careers under the firm hand of their father, trying to mimic the complex harmonies of the Four Freshmen. It’s both spooky and beautiful.

The middle of the album presents the Beach Boys as Mike Love intended – that lovable but bland middle-of-the-road artists they’ve become. It’s harmless fodder that you’d find the group performing on “Good Morning America” or an episode of “Full House,” with Love in his Hawaiian shirt and “I’m not bald” baseball cap, trying to act 17 at 71. There are songs about the ocean (“Beaches in Mind,” “Spring Vacation”), awful lyrics (“Summer weather! We’re back together!”), some subtle throwback moments (‘Shelter” evokes “1967’s “Darlin'”, and “Isn’t it Time” borrows from 1968’s “Do It Again”) and not-so-subtle moments (Love resurrecting “Kokomo” on “Daybreak Over the Ocean”).

But the last four songs on the album leave a lasting impression – they make up a mini-suite similar to what Wilson was trying to do with Smile before his slide into mental illness began in 1967. “Strange World” finds Wilson in a retrospective mood, painted by a melancholy piano and Pet Sounds-style percussion. Al Jardine continues the Pet Sounds vibe, sounding eerily like the late Carl Wilson in “From There to Back Again”. Once known dismissively as the “Fourth Beach Boy” behind Love and the Wilson brothers, Jardine has always been underrated; his voice sounds ageless on this album.

The album takes a melancholy turn for the last two songs of the suite. The Four Freshmen harmonies return on “Pacific Coast Highway,” an obvious nod to brother Dennis Wilson’s standout solo album, Pacific Ocean Blue.   Wilson’s voice still retains some of its recognizable qualities, but for the most part, he sounds all of his 70 years as he sings, “Sometimes I realize my days are getting on. Sometimes I realize it’s time to move along. And I wanna go home. Sunlight’s fading and there’s not much left to say.”

Wilson admits on “Summer’s Gone” that he is a survivor. “Old friends have gone. They’ve gone their separate ways,” he laments. The song has been more than a decade in the making and was once promised by Wilson to be the last song on the last Beach Boys album. It’s a surprising somewhat somber end to the album, leaving you thankful for what he has given us, but also wondering what musical masterpieces are still locked deep in his brain. It’s a still troubled mind riddled by years of recreational and psychotropic drugs; Wilson has admitted that the songs have stopped coming to him. If this is it for him, if his powers are gone, he still saved us a few gems to appreciate before he drives off into the sunset.