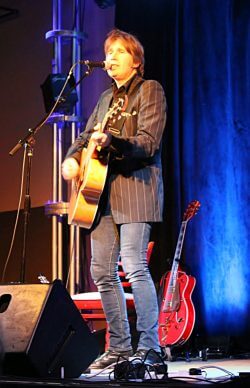 September 14, 2014 – I’m going to Nashville to see another pop icon, this time with mixed feelings.

Justin Currie, former lead singer and songwriter for Del Amitri, is another idol of mine, one that can do no wrong musically. Nashville was the closest city to Atlanta that was on his North American tour, and I’ve made the trek a few times to the Country Music Capital of the World to see a pop artist perform. But my attempts to secure an interview through his inept management have failed. I have sent three emails before the show – one that was answered with, “Let me talk to Justin and get back with you,” and two follow-ups on separate days that went unanswered.

Luckily my friend Marty is with me. He’s never even heard of Justin Currie, and he won’t get to interview him either. But he’s up for the road trip, and when we arrive at 3rd and Lindsley, we stand in line with all the other Justin Currie fanatics – there must be at least 20 of us! – and wait for the doors to open.

When I walk in the club, I find a person laying out Justin Currie merchandise for sale. I slip her my card and explain my interview predicament. She nods and promises to give the card to Justin’s handlers, or manager, or road crew – whoever it is that accompanies a semi-famous 90s-era artist on a small acoustic tour.

The food is tasty at the club, and Marty and I chat in between the opening acts. One, the Mastersons, is a husband-and-wife duo whose tight harmonies and guitar/violin combo reminds me of the Weepies (Note to extended family: That’s a good thing.). Every once in a while, I walk over to the entrance where the artists hide before shows, hoping to see someone feigning importance. The merchandise person assures me that she gave my card to someone backstage, so I know that they know I’m here. I will be firm. I will wait and be a stubborn reporter.

Ten minutes later I sit back down, pouting.

Finally, Currie comes out for his set to rousing applause. Secretly I wonder what he could have been doing backstage that was so important that he couldn’t talk to me. A game of chess? Vocal exercises? Writing the next great single? But that quickly falls by the wayside as he launches into one of his modest U.S. hits, “Always the Last To Know.” He’s playing an acoustic guitar, and although he looks a little older than at the height of his group Del Amitri’s popularity (“Roll to Me” hit the Top 10 back in 1995), he still sports his trademark mutton chops. And he still doesn’t look like the lead singer of a band.

Currie’s Scottish brogue sets him apart from your typical singer-songwriter, but there’s something else that makes this guy seem better than most people you’d see. “I’m captivated by this guy,” Marty says. Marty knows his music, and he has heard or seen something that has caught his attention. Maybe subconsciously, Marty and I know that he’s been successful, and we are basking in his small but powerful aura. But it’s probably just the fact that after 25 years onstage, he seems so much more polished and confident than most artists. And he knows his material, which is composed of about 60 percent of solo songs and 40 percent Del Amitri songs.

He runs through some of the more popular Del Amitri tunes, save for “Roll to Me,” which he apparently hates with a passion (too simple, too poppy, too easy to write to be that successful). The highlight of the night is his acoustic ballad “Be My Downfall,” which quickly wins Marty over. About 3/4 of the way through the song, he effortlessly shifts to a B-side, “Drowned on Dry Land,” which is in the same key and tempo as “Be My Downfall.” I’ve never noticed the similarities, but as he sings, “When your world is full of strangers, and your nights are dark and dangerous, there’s a place where you can hang and just let it go,” the song shifts from a pending one-night stand to a promise of hope and shelter for an alcoholic, and I’m suddenly overcome with emotion.

This is what music can do – transform someone’s feelings with just a change of words. Currie’s music is melancholy but beautiful, and by changing the tone of his lyrics, he can subtly shift the balance between happiness and depression, optimism and cynicism.

He eventually returns to “Be My Downfall,” and while I welcome the old song back, it signals that this moment is about to end.

We get a few songs on encore – Currie playing keyboards for most of it – and before I can think of running back to the artist entrance for an interview, I see people already lining up with Sharpies and CDs, where they will tell him the last time they saw him in 1998, ask about the meaning of the lyrics to “Food for Songs,” or try to make small talk about their hate of Nickelback. It will take a long time to get through that line, and we have a four-hour drive ahead of us.

Marty and I spent most of the trip back listening to Del Amitri music, with him asking which ones were performed during the concert.  We talked about old times, and the miles melted away, as did my disappointment over no interview.

The day after the show, I email Justin’s press person one more time, hoping for an post-concert discussion via e-mail.

She confirms that this can happen! Yes! I send the questions. Send two follow-up emails.