Review: ‘Drink a Toast to Innocence: A Tribute to Lite Rock’ 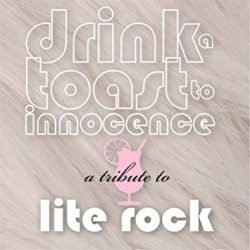 I discovered the radio when I was 8 years old – 1977, for those of you wondering. Disco reigned at the time, and I tolerated the shrieks of the Bee Gees for a while, but my attention continued to be captured by fleeting glimpses of greatness: Pop singles by such unknown artists as Climax Blues Band, Alan O’Day and Robbie Dupree. They leaped to the top of the charts with one great musical idea, only to fall by the wayside for Joey Scarbury, Ambrosia and another wave of one-hit wonders. It was a cycle that continued into the 1980s. I didn’t mind who the artist was. I just wanted more of the same.

I have often wondered how my love for that lite rock music shaped my pop sensibilities of today. The Internet has made this world much smaller, and I’ve discovered other people all over the world with the same taste in music – people who also grew up with their ears close to their parents’ hi-fi stereo, waiting for the DJ to replay that single by some new artist.

“Drink a Toast to Innocence: A Tribute to Lite Rock” now bridges that 30-year gap. Indie pop artists of today, most of whom are not even as well known as their predecessors, have paid homage to those songs and shown why they are now carrying the pop music mantle.

Australian artist Michael Carpenter opens the album with a spot-on cover of Cliff Richard’s “We Don’t Talk Anymore” – one of my favorites of the era – and right off, you realize that these are forgotten gems. (This was one of only three top 10 hits in the US for Richard, who is considered a god in the UK). It’s followed by the Davenports, who totally reimagine Randy Vanwarmer’s syrupy ballad “Just When I Needed You Most.” It’s now a power pop song, and the group’s energy transforms the song into something beefy and respectable.

Respectable. For some reason, we apologize for liking these “mellow gold” songs, as they have often been called. They’re sooo dated, bringing to mind Christopher Cross, unbuttoned shirts and shag carpet. Nothing we want to be proud of. But these songs had hooks, and each artist on this compilation has found them and exploited them to no end.

David Myhr does a spot-on rendition of 10cc’s “The Things We Do For Love,” but he’s paid special attention to the harmonies, layering them even more. The Sonic Executive Sessions add their own harmonies to Stephen Bishop’s “On and On”; the result is a more lush, symphonic sound. Kelly Jones takes England Dan and John Ford Coley’s “I’d Really Love to See You Tonight” in a totally different direction, taking the hypersexual swingin’ 70s out of the song and making it a more tender, innocent, Nanci Griffith-like ballad.

Some songs – honestly, I must have been out playing baseball when they came on the radio. “Shannon” is now a Seth Swirsky song to me, since I missed Henry Gross’ version the first time around. “Bluer than Blue”? Never heard it before, but I prefer Wyatt Funderburk’s version after hearing Michael Johnson’s original.

Yes, I listened to this music. I listened to Styx, and Boston, and Foreigner, and Fleetwood Mac’s “Rumours.” I think Yvonne Elliman’s “If I Can’t Have You” is a wonderful song. cheese aside, they all launched unforgettable melodies deep into my brain. Hearing Mike Viola sing Robbie Dupree’s “Steal Away,” I realized that it has the same chord progression as Tim Christensen’s “Superior,” a song that Viola co-wrote that sends the same chill up my spine as Dupree’s song did 30 years earlier. It’s like Pavlov’s dog.

Songs stick with you. And thanks to Andrew Curry’s “Drink a Toast to Innocence,” it will influence a whole new generation.

2 thoughts on “Review: ‘Drink a Toast to Innocence: A Tribute to Lite Rock’”