Michael McDonald in the Doobie Brothers: Better or Worse? 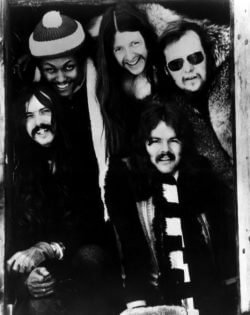 We’ve entered a new subseries of the “Jumping the Musical Shark” series: Bands that went in a totally different direction with the addition of a new member. For better or for worse? That’s up for debate.

In my review of Genesis’ career, I noted that the group took a decidedly pop turn when Phil Collins replaced Peter Gabriel as lead singer. The same can be said for the Doobie Brothers: the introduction of Michael McDonald as the new lead singer, replacing Tom Johnston, signaled a change from 70s classic rock to 80s lite rock. It’s a debate that can get as heated as David Lee Roth vs. Sammy Hagar among Van Halen fans.

The Doobie Brothers formed in 1969 and hit their first peak in popularity around 1973. With such hits as “China Grove,” Listen to the Music” and “Old Black Water,” the group, along with the Eagles, epitomized American classic rock in the early 1970s.

The songs from the pre-McDonald years sound catchy but dated; songs such as “Jesus Is Just Alright” and “Listen to the Music” are moldy oldies. It’s full-fledged hippie rock infused with some country and blues.

When McDonald took over the lead singing duties for the band in 1975, he also took control of the creative direction, pushing them toward a more polished, keyboard-driven R&B sound. And for some, it worked. I’ll admit that “Takin’ It to the Streets” is a great song. “What a Fool Believes” won them not one, but three Grammys. But that song epitomizes lite, easy listening during the 1970s — men dressed in wide lapels, sipping fruity cocktails on the deck of a boat, admiring their medallions and chest hair. Oh my god, is that a synthesizer in the song?

McDonald, perhaps wrongly, is judged by his later work — collaborations with Kenny Loggins and Christopher Cross have cemented his legacy as the king of soft pop. Loggins even co-wrote “What a Fool Believes.” McDonald has been lampooned on SCTV for his laid-back music and was the unwitting star of an indie show called “Yacht Rock.”

Some call his voice soulful; others think he sounds like he has a mouthful of cotton when he sings. And for each classic like “Takin’ it to the Streets,” there’s a “Yah Mo Be There” lurking around the corner.

As for when they jumped the shark, you can’t argue that an appearance — actually, an entire episode of “What’s Happening” — landed them safely on the other side of the shark.

What say you? Whom do you prefer?

2 thoughts on “Michael McDonald in the Doobie Brothers: Better or Worse?”