What Happened to ABBA? 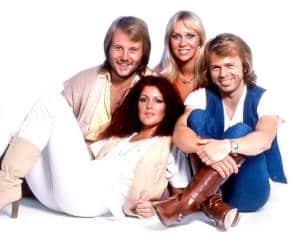 With the exception of maybe the Bee Gees, no group personified the 1970s as ABBA did. With their sequined jumpsuits, angelic lead singers and unforgettable melodies that stayed with you to the point of insanity, the group burst on the scene in 1974 by winning the Eurovision contest with “Waterloo.”

Soon they were a worldwide phenomenon. They hit number one in the U.S., the U.K., Australia, Germany, the Netherlands and their native Sweden, of course. Their hits include “Dancing Queen,” “Take a Chance on Me,” and “Mamma Mia.” They are one of the best-selling artists ever, with estimates running as high as 400 million records sold.

But by 1981, the sensation was pretty much over. Their curtain call, aptly titled, “Thank You for the Music,” was released in 1983, and failed to chart in Sweden or the U.S. They disappeared from the music scene.

So what happened to ABBA?

Most fans point to the dissolution of the two marriages that made up ABBA — Agnetha Fältskog and Björn Ulvaeus, and Benny Andersson and Anni-Frid Lyngstad — as the reason the band broke up. As the marriages started to crumble in the late 1970s, their music turned darker, with songs such as “The Winner Takes It All” and “When All Is Said and Done,” their last Top 40 hit, in 1982.

But if ABBA went away, the four most certainly did not. They had too much talent to do that.

Lyngstad had the most chart success, teaming up with Phil Collins on drums and branding herself as “Frida.” She hit No. 13 in the U.S. with “I Know There’s Something Going On,” which was the 20th biggest-selling single in 1982. The title track from her 1984 album Shine reached No. 6 in Sweden.

In 1992, she married her long-time boyfriend, Prince Heinrich Ruzzo Reuss of Plauen, and stayed with him until his death in 1999. Her daughter from her first marriage, Ann Lise-Lotte Fredriksson Casper, died in a car accident in New York in 1998. She has continued to release one-off recordings throughout her career.

Fältskog released several solo albums during the 1980s, and although she didn’t become a star in America, she still churned out music in Sweden. Her duet with former ABBA backing vocalist Tomas Ledin, “Never Again,” became a Top 5 hit in Sweden.

Her first solo album after ABBA, 1983’s Wrap Your Arms Around Me, went platinum in Sweden and included the title cut and “The Heat Is On” as singles. She took a break from recording for 16 years before releasing a new album, a collection of covers, in 2004. In 2013, she released A, an album that hit the top 10 across Europe.

Ulvaeus and Andersson continued to do what they did best—writing songs. They collaborated with lyricist Tim Rice (Jesus Christ Superstar, Evita) to create the musical Chess. The musical featured the smash hit “One Night in Bangkok” and the ballad “I Know Him So Well” (which inexplicably did nothing in the U.S.).

Andersson released his first solo album in 1987 and then formed his own band BAO (Benny Anderssons Orkester) in 2001, the first of 10 albums by the band.

Ulvaeus stayed behind the scenes mostly, writing lyrics for some of Andersson’s songs with BAO. The two collaborated again in 1995 with another musical, Kristina från Duvemåla, which ran in Sweden for five years. The two have continued to write together.

ABBA-mania resurfaced in the 1990s, thanks to the U.K. duo Erasure’s 1992 release of Abba-esque, an EP that featured covers of four ABBA songs: “Lay All Your Love on Me,” “SOS,” “Take a Chance on Me” and “Voulez-Vous.” The EP topped the U.K. Singles Chart. To capitalize on the success, ABBA released ABBA Gold, a greatest hits compilation, and it became one of the best-selling albums in the world, reaching 30 million in sales.

In 1997, an ABBA tribute group called the ABBA Teens (renamed the A*Teens to avoid litigation) reimagined ABBA songs as modern electronic hits. The album, The ABBA Generation, was a huge smash worldwide, and ABBA’s legacy grew even more. In fact, the fervor grew so much that ABBA was reportedly offered $1 billion from a promoter to do a reunion tour. They turned it down.

The musical Mamma Mia! premiered in 1999 in London and subsequently on Broadway in 2001. It closed on Broadway in 2015, making it the ninth longest-running show in Broadway history. The musical was made into a movie in 2008 and went on to make $615 million at the box office, eventually spawning a sequel.

ABBA’s appearance at the premiere for Mamma Mia! was only the second time all of them had appeared in public as a group since 1986. Despite calls for them to reunite, they refused, wanting to be remembered during their peak success.

Soon, though, the pressure began to mount for new music and a reunion. They began to appear together in public more often at parties and benefits, and in 2016 they announced that they would be reuniting for a project that would feature the members as “abbatars”—lifelike avatars of themselves back in the 1970s, costumes and all—and they had recorded two new songs for the project.

The group released Voyage on November 5, 2021, and despite some good reviews and success in Europe, it failed to reach No. 1 in the U.S. They released three singles — “I Still Have Faith in You,” “Don’t Shut Me Down” and “Just a Notion” — but they did well only in Sweden. ABBA Voyage, a concert residency at Queen Elizabeth Olympic Park in London, featured the abbatars with a 10-piece live band, began 27 May 2022.Andersson was quoted in Variety  as saying nothing else was going to happen with the group after the album and concerts.

1 thought on “What Happened to ABBA?”