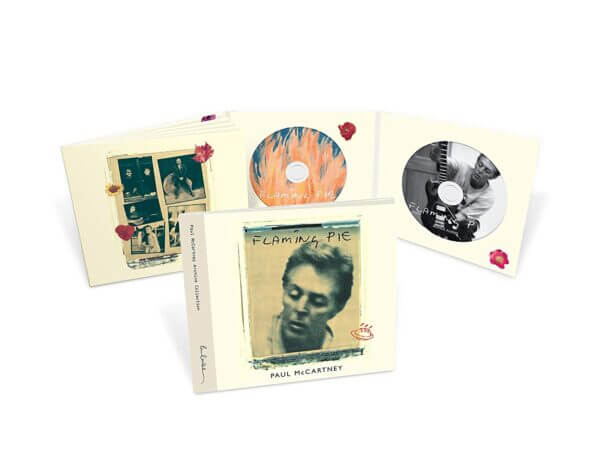 During the 1980s and early 1990s, Paul McCartney was lost in mediocrity. Commercial and critical failures occurred with almost every release, from the limp Pipes of Peace to the uninspired Off the Ground. The only critical success he found was when he worked with another songwriter, Elvis Costello, on the 1989 release Flowers in the Dirt.

In 1995, the Beatles released their Anthology, which was a trip down memory lane for McCartney, and he got to reunite with the surviving Beatles to work on new material. The result was a creative shot in the arm; wanting to recapture that feeling of Beatledom, his 1997 release Flaming Pie was close to perfect, with references to his old group and songs that brought the Fab Four to mind. Never mind that it didn’t result in any hit singles; if you don’t count the singles that he did with Kanye West and Rihanna in 2015, he hasn’t had a Top 10 hit in 35 years.

Flaming Pie got its due reissue last week, with deluxe, super deluxe, and maybe even a super-duper secret deluxe edition thrown in for good measure. The reissue, no matter what edition you choose, costs an arm and a leg; the “Collector’s Edition,” according to McCartney’s website, costs $600. Yikes.

So that leaves me and my dwindling bank account without the numbered cloth wrapped clam-shell box, the two DVDs, most of the CDs, the 128-page book, copies of John Hammel’s studio notebook, the Club Sandwich Magazine, a Flaming Pie plectrum, an envelope containing handwritten lyrics for eight tracks and The Flame newspaper. I get what’s on Spotify, and that’s 39 songs and six segments from McCartney’s radio show “Oobu Joobu.”

Flaming Pie is reminiscent of McCartney, the first album released by the former Beatle back in 1970 that signaled the end of the Beatles. It consists of several perfect songs amid filler rock and blues cuts which do nothing to further his musical legacy. Among the jewels: the mid-tempo rocker “Young Boy,” the delicate “Blackbird” touches of “Calico Skies,” and the grand opus, “Beautiful Night,” a song written back in 1986 which features Ringo Starr on drums and background vocals. Others, such as “Souvenir” and the title cut, bring to mind the Beatles’ sound and humor (John Lennon always said the inspiration for the name Beatles came from a man on a flaming pie who pronounced, “From this day on you are Beatles with an A.”)

The album is sometimes touching, with love songs to Linda ( “Calico Skies and “Heaven on a Sunday,” which features a guitar solo from his son James) and a tribute to Ringo’s first wife Maureen Cox, who had passed away in December 1994. Unfortunately, it also suffers from the tuneless rockers “Really Love You” and his awful duet, “Used to Be Bad,” with Steve Miller, composer of perhaps the worst song ever.

Now to the bonus material. The CDs also feature home demos of the songs, and it’s interesting to hear the evolution of each of the songs. There are a few homey touches, such as the phone ringing during the recording of “Souvenir,” but the interest wanes after a few listens.

We do get a few unreleased songs, some of which, such as “Same Love” and “Love Come Tumbling Down,” offer the same syrup that we got during the 80s. But a finished version of “C’mon Down, C’mon Baby” might have been a helpful addition.

What the reissued Flaming Pie really does is remind us of the renaissance of the later Paul McCartney; after 15 years of going through the motions, he finally woke up and realized he still had to contribute to his legacy. What followed would be some of his finest work: 2005’s Chaos and Creation in the Backyard, 2007’s Memory Almost Full and 2013’s New. Never mind all the toys you get with the super-duper deluxe editions; just enjoy McCartney at his best.