A Song I Used to Love but Now Hate 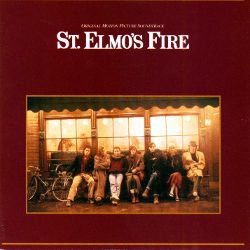 Like most everyone in 1985, I was enthralled with St. Elmo’s Fire. Looking back now, I have no idea why.

I think we all liked the idea of St. Elmo’s Fire. Another brat pack movie, guaranteed angst, Ally Sheedy, etc. And the theme song was catchy as hell – just a little bit hair band classic rock, sprinkled with synthesizers, pounding drums and a memorable, uplifting chorus. I couldn’t get it out of my head.

So when football season rolled around, we tried to convince our band director to buy the music to “St. Elmo’s Fire” for the marching band. Unfortunately, it had not made its way to the Hal Leonard music factory yet (We were still playing “Hot Stuff”), so my friend Marty and I decided we’d just write it ourselves.

We had no idea what we were getting ourselves into – figuring out what each instrument needed to do at each point in the song, finding harmonies and bass lines in the song, and transposing them to the concert pitch of each instrument. This was before the days of the Internet or sheet music transcription software. We wrote all the little notes ourselves, using Liquid Paper when we messed up. It took a few weeks of listening to the song over and over and over – trying to make out what the synthesizer was doing on a certain measure, playing it one more time to make sure we captured it. Then we’d move on to the next measure and start the process over. Lather, rinse repeat.

By the time we got all parts transcribed, I was so sick of the song that I never wanted to hear it again. Every note, every nuance of this song is burned into my cranium, and listening to it is agony. I hear things other people probably don’t – little flourishes from a keyboard, the exact moment Parr’s voice gets gravely.

What’s worse, though, is that Marty and I forgot that our band sucked.  The debut of the song was a disaster – I think our band had about 25 members at the time, and there simply weren’t enough players to fill out the sound. Imagine John Parr singing with a Casio portable keyboard instead of his full band.

A few weeks ago, I was cleaning out the inside of our piano bench and found a few originals. Looking back, I’m proud of the work we did – I learned a lot about transposing, phrasing and voicing. I learned that hard work pays off. And I never want to hear that damn song again.