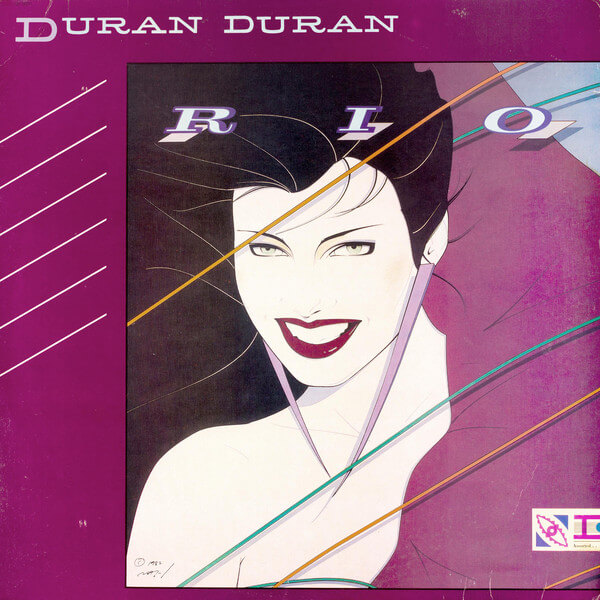 Duran Duran was born during the last gasps of punk rock, when people got tired of listening to mostly bad music and jumping around with safety pins in their ears and shirts. It certainly owed a debt of gratitude to punk — I don’t see Duran Duran making it at the height of prog rock or classic rock, although it could have possibly emerged from the disco scene. But here they were in 1982 in America, having already conquered the UK with “Planet Earth” and “Girls on Film.”

The timing was perfect. America was in a funk musically, having to endure reincarnations of the Doobie Brothers, Kim Carnes and more classic rock. And Duran Duran just happened to release their second and greatest album, Rio.

Accompanied by wild videos that could only be described as James Bond-meets Indiana Jones, the five-man group with three men with the last name Taylor took the United States by storm – at least the female side. The men were a little dubious of their frilly shirts, makeup and overall attraction to girls to like them. It was hatred, homophobia and jealousy all rolled into one.

I was not one of those guys. Granted, I was not one of those girls, either. “Hungry Like the Wolf” took me by the lapels and slung me up against the wall, threatening to beat the crap out of me. It was fast, with its wild tribal beats, synthesizers and lead singer Simon Le Bon’s plaintiff vocals. It was infinitely melodic, though, and I found myself humming along to the song every time it came on the radio.

Duran Duran’s nemeses were the exact opposite; led by a transgendered singer who dug reggae, Culture Club appealed mostly to the women because the men didn’t know what to think of Boy George. Musically inferior to Duran Duran, they relied on the shock value of Boy George to make their splash in the United States with “Do You Really Want to Hurt Me.” They followed Duran Duran over the pond, and the British Invasion had begun.

Duran Duran clearly led the way. On the cover of every Tiger Beat and teen magazine around, they fought for respect. But Rio didn’t even feature the band on the front, opting instead for cartoon-like woman smiling from atop a purple background; it’s become synonymous with the New Wave movement. It was as if the band wanted the music to speak for itself.

And it did. “Hungry Like the Wolf” reached No. 1 in early 1983, and “Rio” and the ballad “Save a Prayer” reached the top 20 merely on the strength of their videos. And there could have been more hits had the record company tried in the United States. “My Own Way” had its own “Planet Earth” vibe, with the soon-to-be familiar Duran Duran chorus that had slammed me against the wall. It sounded a lot like “Hold Back the Rain,” which wasn’t released as a single but could have been a hit.

“New Religion” would have done well with a radio edit, clocking in at five and a half minutes. The sublime “Save a Prayer” paved the way for more ballads later in their career; it’s smooth and shiny but beautiful in its own way. And “Rio” featured a saxophone against a complicated bass track and pounding drums.

Sure, their lyrics weren’t thought-provoking (“It means so much to me / Like a birthday or a pretty view”), but they never claimed to be poets: “So what if the words ain’t rhyming / Did you think that it’s just a game? / I probably didn’t even say that right / And I really don’t give a damn” (from “Hold Back the Rain”).

These guys, it seemed, were in it for more than just fame and fortune. They actually liked to play music and were damn good at it. Roger Taylor’s syncopated backbeats held their own against John Taylor’s funky bass playing, and Le Bon’s earnest singing made the whole package come together.

Their stylish dress and expensive videos were all for the glossy photo mags, and their style paved the way for the New Romantics, a version of New Wave marked by flamboyant dress and makeup reminiscent of Marc Bolan and early David Bowie. They were far from cross-dressers like Boy George — only keyboardist Nick Rhodes’ makeup was truly noticeable — but they were high fashion, which probably lost some points with them among music critics.

But for Duran Duran, it worked, even if the American buying public didn’t buy Adam Ant and Ultravox. Duran Duran fought it out with Culture Club for a while, and it was neck and neck, but Duran Duran’s longevity finally won out. What drew me to the group was the possibility that maybe — just maybe — this group might be the next Beatles.

I saw girls fainting in their sight, the sex symbols making music that was melodic, energetic, and pleasing, and No. 1 records piling up. I had missed the Beatles, only knowing of their legacy, but this group — this group seemed to have what it took. The music press wasn’t taking them seriously, but maybe the buying public would.

During the 80s, they did. Duran Duran massed a string of hits, including “The Reflex,” “Union of the Snake,” “New Moon on Monday,” “The Wild Boys,” a James Bond theme (“A View to a Kill”) and “Notorious.”

What is even more amazing than the Beatles’ ride is that Duran Duran, for the most part, has stayed together. Taylors have come and gone, but the core of the group has continued putting out music just as infectious as Rio. Their Top 10 reign ended in 1993 with “Ordinary World” and “Come Undone,” but they have continued churning out records. Their concert at Chastain Park a few years ago had them as energetic and even more soulful than I remember them, as they covered early rap classics as well as their own singles.

They’re entering their 60s now, and Simon Le Bon, Nick Rhodes, John Taylor and Roger Taylor are continuing to prove the press wrong, album after album. And they’ll always be remembered for their debut release in the United States, Rio, which fired a warning shot over Carnes, Steve Perry and Michael McDonald’s heads and foretold a new era in pop music — one that would last a few years, at least, and influence a new generation of artists in the 2000s. Long live New Wave.