The 5 Most Influential Artists of the 1960s

The 1960s were more than just “Yeah Yeah Yeah.” Rock began to evolve out of its walking bass line and three-chord songs, incorporating more instruments, singer-songwriters and innovative arrangements. With Motown, R&B took a foothold in American society, and true singer-songwriters began to emerge. Music wasn’t just something to dance to anymore; instead, it could be used as a force for good, and artists took it in a decidedly more serious, even political direction. 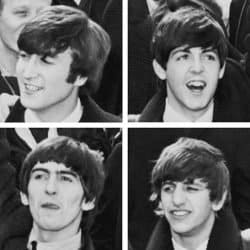 Despite the few naysayers out there – I actually got flamed for posting this piece on why The Beatles are the greatest band ever – it’s impossible to formulate a coherent argument against their influence. It’s like having to argue that Michael Jordan was a great basketball player. So here goes, in one paragraph:

One of the first groups to write their own material, the Beatles paved new ground with each release, employing various innovative techniques such as feedback, tape loops, sitars and double-tracking vocals. They also established the album as more than just a piece of acetate that contained a few hit songs and filler. From Zeppelin to Oasis, most bands point to them as an influence. I mean, it’s a given, isn’t it? Do I really need to say more?

Sure, he can’t sing, and his music isn’t for everybody. But you probably know more Bob Dylan songs than you think, with artists still covering his material 40 years later. He even influenced the Beatles, encouraging them to explore new sounds and validating their choice to write their own material. (Some even point to his introducing them to marijuana as a turning point in the Beatles’ career.)

Dylan thrust the folk music scene into the spotlight in the early 1960s with a series of landmark albums, then angered all the folkies by playing an electric guitar (gasp!) during the Newport Folk Festival in 1965. And of course, there is Bob Dylan the poet, a man who sparked the protest era with his vivid, thoughtful lyrics.

But foremost, he showed that you didn’t have to have a voice like Perry Como or have looks like Elvis to be a star. Songwriting became an important talent, and lyrics became an art form.

It’s hard to pin them down to one decade, given their longevity. And since they incorporated all types of genres into their sound, from blues to folk to R&B and (later) funk and disco, you can hear a bit of the Stones in just about any group. But in the beginning, they were a rock band — not a very good one at first, but Mick Jagger’s prancing and attitude not only made lead singers the defining personality for a band. It also put the naughtiness back in rock ‘n’ roll, something that had been missing since Elvis the Pelvis.

So how do you choose between Sam Cooke, Otis Redding and James Brown? Cooke was a crooner, gifted with a fantastic voice — some call him the king of soul music. Those who don’t usually choose Redding, who in his short career transformed soul music.

But James Brown sticks out — literally and figuratively. Outrageous, sexual and at times asexual, his music was unlike anything being done at the time. He seemed to skip soul and rhythm and blues, going straight to funk years before Sly and the Family Stone, George Clinton and Parliament did it. Two decades later, Prince looked and sounded like a James Brown clone. Michael Jackson danced like him and sold tens of millions of records. And even Bruno Mars owes some of his talent and popularity to Brown.

There it is — the pantheon of R&B and funk, all standing in line to kiss Brown’s ring. He is the king.

If I were to play a word association game and someone mentioned the words Jimi Hendrix, I’d say “guitar.” His songs – meh. His singing – no thanks. His guitar playing, though – indescribable and phenomenal. One of the first to bring the guitar solo into prominence, he played the crap out of the instrument — sometimes even lighting it on fire to illustrate a point — and hard rock was never the same.

Hundreds of guitarists ranging from heavy metal to punk and R&B cite him as an influence. Again, Prince’s emotional, searing guitar playing can be seen as an evolution of Hendrix. He definitely deserves to be among the most influential artists of the 1960s. And thousands of kids playing “Guitar Hero” should thank him daily.

Even today, The Velvet Underground’s music sounds weird and cutting edge. And it’s stunning, considering their lack of popularity at the time, that you can hear their style in the music of artists such as R.E.M., Bjork and Of Montreal. You can pretty much point to the Velvet Underground as being the Adam and Eve of most alternative music today: Velvet Underground -> glam rock -> punk -> college rock -> grunge … You get the picture.

What? No Man in Black? I must confess that he was originally in my top 5, but when I tried to nail down his influence on subsequent music, I came up with nothing. He is probably one of the most respected men in rock and country music, and many artists readily admit to being a fan. They mention his original music, they talk about his imposing voice and his nonconformist attitude. But you don’t hear much of his sound in today’s country music, and his music stands as an anomaly among all genres.