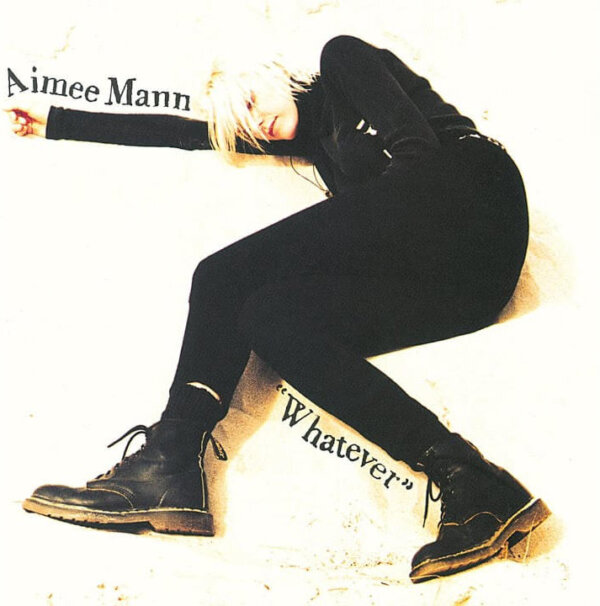 Poor Aimee Mann. She’s best known for being the lead singer of the one-hit wonder ’til tuesday. The group’s 1985 single, “Voices Carry,”was a haunting new-wave classic that is still being played on all 80s radio stations.

But after that — nothing. ’til tuesday released a few more albums that went nowhere. And their record label dropped them before the 80s ended.

So Aimee pursued a solo career. Her first release, Whatever, also flopped on the charts, but it’s a shame. She proved that “Voices Carry” was no fluke, reestablishing herself as a pop music singer-songwriter in the same vein as Elvis Costello and writing sharp, witty songs with a catchy melody.

Whatever Is the Perfect Album

Very rarely, an album comes along that is perfect. On a perfect album, every song is as good as the next — not a bad apple in the barrel.

Many amazing albums don’t meet this standard. Abbey Road has the noisy heavy-metal “I Want You (She’s So Heavy)”. Skip it. The Joshua Tree‘s “Trip Through Your Wire” is off-key filler for an otherwise solid album.

Where’s the bad cut on Aimee Mann’s Whatever? There ain’t one.

Go ahead. Try to find a bad song on this CD. “I Should Have Known,” the opening number, is an in-your-face rocker that still manages to feature some “Ooooh — bop bop bop” vocals that somehow disarms the heavy feel of a rock anthem.

How about “Fifty Years After the Fair”? With background vocals by Ex-Byrds singer Roger McGuinn, Aimee channels the Byrds with a jangly folk-rock tune that leaves you smiling at the end.

I still have ’em coming. Aimee slows things down with “Fourth of July”, a poignant ballad that turns a happy holiday into recollections of a lost love: “So that’s today’s memory lane / With all the pathos and pain / Another chapter in a book where the chapters are endless and they’re always the same.”

Aimee’s muse was apparently Jules Shear, an ex-boyfriend who must have done some damage. “Could’ve Been Anyone” has Aimee exclaiming, “It’s so hard not to blame you / It’s hard not to put all the blame on you.” She then tries to downplay his influence, saying, “You lost your place in the sun, but never mind / It could’ve been anyone.”

But Aimee is at her best with the ballads. Peeling away her defenses, she comes across as earnest and somewhat vulnerable. The acoustic songs are intimate, but each tells a different story. “I’ve Had It” tells the story of her and her band trying to find that elusive formula that will take them to superstardom. She knows that fame is fleeting, and sometimes the spark between bandmates is as well:

So we all just started playing
and then something strange occurred –
not a person stirred, oh, it started out one way
but it turned out to be okay
and I felt that someone should say –
Oh, experience is cheap
if that’s the company you keep
and before you know that it’s free
you’ve had it

She tries her best to describe an indescribable feeling (Love? Anger? Frustration?) in “I Know There’s a Word for This.” Again, simple acoustic guitar, laced with a string accompaniment, shows an intimacy that you believe is a rare glimpse into Aimee’s soul.

Finally, there’s “Mr. Harris” — a beautiful ballad about a relationship with an older man. This time, it’s a piano, woodwinds and strings setting the mood for a song that in another era could have become a standard from the Great American Songbook.

After Whatever, each album from Mann has gotten a little worse. It’s as if the magic has worn off. The sly, acerbic lyrics are still there, but the melodic craft is gone. It’s as if she lost her muse — or her fellow collaborator, Jon Brion, did most of the heavy lifting. But that just makes Whatever even more special: It’s lightning in a bottle.