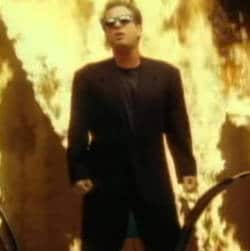 Billy Joel will always be known as “The Piano Man,” the American equivalent of Elton John. Belting out ballads and pounding away at the ivories, he and John were cultural anachronisms, playing music that didn’t seem to fit among the disco hits and emerging New Wave sound of the 1980s. But they were loved on classic rock radio.

Joel started getting noticed by record companies in the early 1970s, and his first hit from his first album, Piano Man, established his career. He would fill the 1970s and early 80s with hit after hit: “Just the Way You Are,” “My Life,” “You May Be Right,” and his first No. 1 hit, “It’s Still Rock n’ Roll to Me.”

A Comeback (Of Sorts)

Critics loved him, but the music-buying public started to abandon his sound for the British Invasion in the early 1980s. Two of his best albums, Songs in the Attic and The Nylon Curtain, didn’t yield any Top 10 songs. That all changed with 1983’s An Innocent Man, a huge album that was a throwback to the 1950s. “Tell Her About It,” “Uptown Girl” and “The Longest Time” were all radio staples and helped push American music back into the spotlight.

From then on, for the rest of the decade, we couldn’t get enough Billy Joel. An Innocent Man kept his fans satiated through 1985, when he released Greatest Hits I and II. It’s sold 11.5 million units in the United States alone. He followed that up with The Bridge, which yielded two Top 10 hits.

In 1989, Joel released Storm Front, which featured the hit single “We Didn’t Start the Fire.” It was a fast-paced song similar to “It’s the End of the World as We Know It (And I Feel Fine)” and mentioned most of the important events and cultural icons of the last 40 years, from John F. Kennedy and Elvis Presley to “Wheel of Fortune” and cola wars. It hit No. 1, but the backlash was monstrous.

Critics pointed toward the lack of melody in “We Didn’t Start the Fire,” his trademark piano being pushed to the background while electric guitars took over. They said the song’s chorus was Joel (and his generation) refusing to take responsibility for any of the events of the last 40 years, and called it a novelty song. In 2014, guitarist, actor and writer Carrie Brownstein called it a “horrible, horrible song.”

And sure enough, the parodies came like, well a bonfire: The Simpsons, Dr. Demento, JibJab, The Office and Parks and Recreation all created their own versions of the song. An episode of “The Family Guy” made fun of the song, with Peter trying to remember the lyrics but fumbling through most of it. The parodies were still coming as late as 2019.

It was named the 41st worst song of all time by Blender Magazine. Joel himself would lament that it was “one of the worst melodies I ever wrote.” In 1993, he exclaimed, “You take the melody by itself, terrible. Like a dentist drill.”

The follow-up, the underrated “I Go to Extremes,” hit No. 6, and the title cut from his album River of Dreams hit No. 3 in 1993. It was his last pop release, the only other studio album being his classical work Fantasies and Delusions.

To be fair, it’s a pretty ingenious song, the way the lyrics roll into each other, and it can be an earworm, with the chorus being repeated after every 15 names or so. But like so many songs that reference a point in time, it has become anachronistic.

Billy Joel didn’t start the fire. But his song certainly was the beginning of the end of the fire.