Rebecca Black and the ‘Friday’ Phenomenon 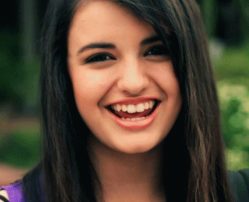 Check most of the social networks – especially Twitter and YouTube – and you’ll see the name Rebecca Black and her song “Friday” standing at the top of the most viewed/tweeted/shared song, surpassing anything done by Bieber, Sheen or Gaga.

One listen to the song – and a look at the video – probably leaves you scratching your head and wondering what the fuss is. Black, a 13-year-old who was previously unknown until about two weeks ago, suddenly has 40 million views of “Friday” on YouTube. The song features such inane lyrics as “Partyin’, partyin’ (Yeah) /Partyin’, partyin’ (Yeah) / Fun, fun, fun, fun” and “Yesterday was Thursday, Thursday /Today is Friday, Friday / Tomorrow is Saturday /And Sunday comes after … wards.”

The video is even worse, with Black and her “friends,” who are horrendous actors trapped in the awkwardness of puberty, pretending to have fun while “partyin’.” But it’s like a train wreck – you can’t take your eyes off it, and despite the simplistic, formulaic accompaniment and melody, you slap yourself silly for singing it the rest of the day. It’s annoying. I wouldn’t even call it catchy.

Why is ‘Friday’ Popular?

So now the Internets are abuzz with theories as to why this has become so popular. Is it from adults sharing a video that’s so bad it’s funny? Is it from music purists who are bemoaning the commercialization and formulation of popular music? Or do kids really think it’s good?

The answer is yes.

Sure, it’s bad. But kids like it. Kids also like Justin Bieber and Miley Cyrus. Hell, when I was younger it was Shaun Cassidy, Tiffany and Debbie Gibson. And there have been stupid songs that have captured the Zeitgeist – “Macarena,” “I’m Too Sexy,” “Who Let the Dogs Out” and “Yakety Yak.” And now there’s a backlash against those criticizing Black, which has given the video even more publicity.

Ever since pop music has been, well, popular, there have been teen heartthrobs with marginal talent who take a song written for them, record it, and with a lot of help from record label execs, rocket to the top of the charts. Even most of the girl groups of the 1960s sang songs that were manufactured by Brill Building songwriters such as Carole King and Burt Bacharach.

This is the case with Black as well. It’s hard to believe that something with such inane lyrics wasn’t written by a 13-year-old. She revealed last night on The Tonight Show that her record label, Ark Music Factory, gave her the song to record. Which leads us adults to ask, “What? A grownup wrote that?”

But something doesn’t add up here. I keep thinking that there’s a “Gotcha” coming, that this sensation is actually part of some more elaborate plan – maybe a sociological experiment. Or maybe the song has backwards messages in it.  John Seaborn Gray from the Houston Press is more critical: “Who’s behind Rebecca Black? We don’t know yet. But they should know that our ire isn’t directed so much at Rebecca herself, but squarely at them. Rebecca is just a kid. These cynical manipulators, on the other hand, know exactly what they are doing.”

And they’ll be laughing all the way to the bank.

3 thoughts on “Rebecca Black and the ‘Friday’ Phenomenon”