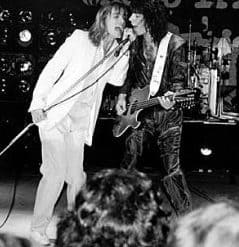 It was one of these Facebook memes in which a friend posts something, and if you “Like” the post, the friend will continue the meme by assigning you something to post about, then you do it, friends “Like” it, you assign, lather, rinse, repeat. I usually ignore them, but this was “Name your favorite and least favorite song by the band assigned to you.” I couldn’t pass this up, even if I got Nickelback.

My Facebook friend got Blondie. Sooo easy; the only problem is whittling it down to one. I’d have to create a Top 10 even.  I gave the post the official Facebook “Like,” and she assigned me Cheap Trick.

What? The revered crafters of my favorite genres of music, power pop? This was a gift! Cheap Trick was the epitome of 1970s arena rock, but musically they were known for continuing the melodic trend that Big Star, the Raspberries and Badfinger established earlier in the decade, and paving the way for other power pop groups such as the Knack, Weezer, and Jellyfish.

Okay. Cheap Trick. The first song that came to mind was their Top 10 hit “I Want You to Want Me” from the legendary Live at Budokan album. Hmmm. I never really liked that song; it was repetitive (“Didn’t I, didn’t I, didn’t I see you cryin’?) and didn’t feature many harmonies or inventive chord progressions. Okay, no worries. What about “Surrender,” one of the power pop world’s more revered songs? Meh. It also sounded repetitive and tuneless.  “Dream Police”? I suffered from one of the worst earworms ever in the late 1970s when the chorus kept playing in my head over and over one night. I thought it would drive me crazy. I always hesitate to even mention that song for fear that it will come back like a case of shingles.

And that was it, aside from their commercial selling out in 1988 (at least, according to diehard fans) with “The Flame” (which was a formulaic power ballad but also gave them their first and only #1 song). I couldn’t name another song by them. So I sat down with one of their greatest hits packages (There have been many) to learn more. I listened to each song closely, waiting for some hook to catch me and make me swoon with syrupy pop goodness.

And I kept waiting.

What I heard, mostly, was an arena-rock band from the 1970s – think the Who meets Aerosmith. A lot of yelling, a lot of screeching guitars, and very little Beatlesque melodies and harmonies.

What was wrong? Was I missing something? Why did everyone else get it and I didn’t? It was like being the only one not able to see the hidden images in those 3D paintings. These were guys who were professed Beatle lovers, who named one of their songs “Taxman Mr. Thief” after the song “Taxman,” who covered “Magical Mystery Tour” and recreated the entire Sergeant Pepper album. And it just sounded like noise to me.

I turned to some of my power pop buddies on PowerPopSquare‘s Facebook group and asked them the same question. Where was the melody? Where was the pop?

The answers helped. The problem? I was listening to the wrong decade. Silly me, I should know by now. Don’t listen to the popular era.

The first find from the 80s was “I Can’t Take It,” from the 1983 album Next Position, Please, which was produced by fellow power-pop artist Todd Rundgren. The heavy guitar sound is toned down to a more acceptable level, and the chorus is memorable.  I found another jewel in “Tonight It’s You,” from the 1985 album Standing on the Edge. And then there was 1988’s Lap of Luxury, which spawned “The Flame” and the Elvis Presley cover “Don’t Be Cruel.” I grew up listening to those songs on Top 40 radio, so despite fans’ disgust with their overproduced, slick sellout, it was still good.

I continued through their discography and out of hundreds, I finally settled on about 15 that sounded unique and pleasing to my ear. Not a great ratio for such a respected power pop band. But I really liked some of them, including a newly found Christmas song (“Come On Christmas“) that features a memorable chorus that sounds like, well, Big Star.

I listened to hundreds of songs and finally found about 15 that I truly enjoyed listening to. Not a great ratio for such a respected power pop band, but I’ve always been more attracted to the pop part of power pop.

The winner? “Tonight It’s You.”

Here is the video, in all its 80s glory, featuring a host of mullets, Aquanet and supermodels, not to mention some bizarre boxing subplot. It’s followed by a playlist of my 12 favorite Cheap Trick songs – even longer than my fantasy Blondie list.

Oh, my least favorite? I heard a lot of songs worse than “Dream Police,” but I will never forgive Rick Nielsen for planting that earworm in my head so long ago.